Life of an Artist

Michelangelo spent most of his life in Florence, where he completed beautiful pieces of art and elaborate sculptures. At the age of he was taken under the wing of Lorenzo de' Medici, he then lived in the Medici palace for many years where he was a student of the Sculptor Bertoldo di Giovanni. From a young age Michelangelo decided he didn't want an education and preferred the company of painters instead. In his lifetime he created paintings, sculptures, buildings, and poetry. Some of these include The last Judgement and The Creation of Adam, both paintings. He also created the Sculpture of David. None of his creations could've been possible if not for his patrons, the Medici's

Sculpture of David by Michelangelo 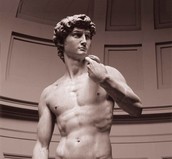 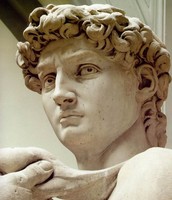 This piece was created in 1504 and can be found in the Accademia Gallery in Florence. This sculpture was very significant because it was a sculpture of a man, and not someone from the Christian Religion. It was also significant because the man isn't wearing any clothes, which was very uncommon in this time. I find this piece interesting because it was very rebellious for its time, it was rebellious since most of the art created was based on religion and were not nude. This is a great example of Humanism because this creation is a human and not an angel or someone from the Christian Religion.