March kicked off with Ally Week, where the school-wide theme was “How to be an ally in the struggle for racial justice.” The Penn Class participated in a multi-day activity that allowed them to experience privilege and the lack of. To culminate this activity, the class discussed how (s)he could have been an ally to those without the privileges. The students then focused on recognizing the beauty of differences, through the creation of self-portraits.

The Penn Class started to compose a Penn Class Book in which each student will contribute two pages. First, the students took time to reflect on what they love about themselves and why. Then, they put that in writing, accompanied by their self-portrait. Next, each student wrote The Best Part of Me for their second page. Using photography, each student artistically showed the best part of him/her to pair with their writing.

In Reading Studio, students practiced the strategies we have focused on across genres and in more challenging texts. They worked on recognizing when and how they apply each strategy. The class discussed what the author did in books to help with each strategy. Then, the students used that knowledge to apply the strategies in Writing Workshop. Penn Class students achieved 40 minutes of quiet, read-to-self stamina!

In Writing Workshop, students worked on applying strategies from Reading Studio in their writing as they began a unit on realistic fiction. They began by planning the beginning, middle, and end. The students then wrote the beginning of their stories by adding detail sentences. Students worked on composing showing sentences. They were challenged to write so the reader could draw an inference about a character trait, through an action the main character did.

Our study of electricity came to an end with a visit from Chuck, “The Train Man” who taught the class about model trains and how they are powered.

In 1st grade math, students strengthened their addition and subtraction facts, ability to apply and figure out number patterns, and find the difference between two numbers using a variety of strategies. Students played The Difference Game and Addition Top It to practice these skills. They continued to read and create tally charts and graphs in order to represent data.

regrouping, comparing quantities, and finding differences, and counting back change from two dollars. 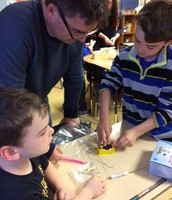 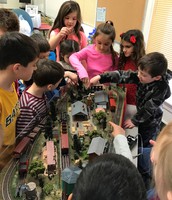 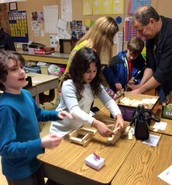 We have spent the month reading works by Shakespeare. We read the series Shakespeare Can Be Fun by Lois Burdett. We had a parent visitor who explained why Shakespeare’s writing is classic. He talked about the vocabulary associated with Shakespeare’s writing: sonnet, iambic pentameter, couplet, stanza, lyric, rhyme scheme, and poetic license. He also shared some famous quotes. Did you know that Shakespeare wrote the first knock knock joke? Though the exact origin of the knock knock joke is unknown, many scholars point to the second act of Shakespeare's Macbeth—written around 1606—as the earliest known example. We concluded the unit by performing A Midsummer Night’s Dream as a reader’s theatre.

This month, Fox Class students learned how to write an essay. They included a topic sentence, supporting sentences, transitional words, and a conclusion. After Ally Week the students chose to write a response to one of the following queries. Why is it important for you to learn about people who are not like you? What can you do to help make sure everyone is treated fairly, regardless of their race, religion or age? Is it a good thing to have different kinds of people in your classroom or school? Why or why not?

The response to the queries will be judged on content and students will be chosen to attend Elementary Student Diversity Day in April based on their responses.

This year, the school-wide focus for Ally Week was, “How to be an ally in the struggle for racial justice.” The Fox Class began the week by discovering Who Am I? (Name, race, heritage, physical characteristics, likes and dislikes, family and community.) Then, we talked about how the Black Lives Matter movement began. We looked at the Black Lives Matter timeline and talked about how Black Lives Matter is a peaceful movement and anyone can join. We created our own Pyramid of Hate and then recreated it to be a Pyramid of Social Justice. We had rich conversations while trying to decide where specific ideas fit on the pyramid.

UFS had a Curriculum Night where the entire school participated in STEAM (science, technology, engineering, arts, math) activities. In the Fox Class, students had some design challenges using Keva Planks and other challenges using electricity.

Educators from NOVA (Network of Victim Assistance) came to the classroom and presented a personal safety program. The Fox Class is practicing a skit about George Fox, The Man Who Wouldn’t. They will perform this in the future at a Meeting for Announcements.

Third grade math studentslearned to read and compare decimals to the thousandths. We related decimals to money and the meter stick and have begun a unit on geometry using K’Nex.

In 4th grade math, students have completed the 6th unit, Division and Measures of Angles. Students learned strategies for solving division problems with 1 and 2-digit divisors and how to estimate and measure various angles. We are now in the 7th unit - Fractions and Their Uses, Chance and Probability. In this unit, we are learning about fractional sets, equivalent fractions, adding and subtracting fractions, comparing fractions, relating fractions to decimals, and probability. We continue to reinforce these concepts through various games and puzzles and students continue to practice problem-solving strategies using Problem Solvers.