rogelio is using Smore newsletters to spread the word online.

Get email updates from rogelio: 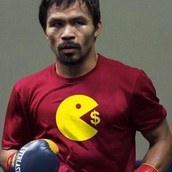 When it was determined that Pacquiao would fight American boxer Oscar De La Hoya, many observers speculated that Pacquiao was out of his league. De La Hoya had won ten titles in six weight classes and was a former Olympic gold medal winner.

In December of 1998, Pacquiao won the WBA Flyweight Championship when he defeated Chatchai Sasakul in an eight-round bout. He held the title for a year. Despite his weight increasing from 106 to 113 pounds, in a fight with Rustico Torrecampo he lost via a third round technical knockout. Following this fight, Pacquiao made his U.S. debut in a match against the then-International Boxing Federation's super bantamweight champion, Lehlohonolo Ledwaba. He faced off with Ledwaba in 2001 at the MGM Grand in Las Vegas, where he won the fight and the title. He went on to defeat some of boxing's biggest names, including Marco Antonio Barrera of Mexico, Juan Manuel Marquez, and Eric Morales.
Manny Pacquiao vs Timothy Bradley III / Мэнни Пакьяо - Тимоти Брэдли 3 Full Fight / Весь бой 1080p
The World's Greatest - Manny Pacquiao Career Highlights

rogelio is using Smore newsletters to spread the word online.