What is the Anorexia Nervosa

Anorexia nervosa is a eating disorder where people starve themselves, subsisting on little or no food for very long periods of time, yet they remain convinced that they need to lose more weight. (Butcher & Mineka 2004) Due to starving themselves and the thought of needing to lose more weight their body weight is significantly below what is minimally normal for their age and height. The term anorexia nervosa literally means "lack of appetite induced by nervousness." At the heart of anorexia nervosa is an intense fear of gaining weight or becoming fat. There are two types of anorexia nervosa: the restricting type and the binge-eating/purging type. The difference between these two types explains how people maintain their very low weight. (Butcher & Mineka 2004)

In the restricting type, every effort is made to limit how much food is eaten, and caloric intake is tightly controlled. People with the binge-eating/purging type of anorexia nervosa have a breakdown of restraint that results in periods of binge-eating. (Grohol 2006) A binge involves out of control eating, in which the person consumes amounts of food that are far greater than what most people would eat in the same amount of time and under the same circumstance. These binges are then followed by efforts to purge the food by self-induced vomiting or the misuse of laxatives or diuretics. (Nolen-Hoeksema 2014)

What Anorexia Nervosa does to your body

We can see that through starvation and malnutrition this woman's body has eaten away at her muscles caused by Anorexia Nervosa. Notice how thin her arms and feet are. 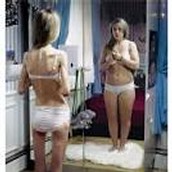 What anorexic people see in the mirror

Even though anorexic people are dreadfully thin, when they look in the mirror they see an image of themselves being overweight.

There are no simple answers to the causes of anorexia nervosa and other eating disorders. Anorexia is a complex condition that arises from a combination of many social, emotional, and biological factors. There are also cultural idealization of thinness that plays a role, as well as family environment, low self-esteem, and past traumatic experiences that may all cause anorexia nervosa. Though there is no exact cause for anorexia nervosa it is usually a combination of biological, psychological, and environmental causes. (Causes of Eating Disorders 2014)

Biological causes: There may be genetic changes that make some people more vulnerable to developing anorexia and someone's genes could cause anorexia. Like most psychological disorders anorexia nervosa and other eating disorders tend to run in families. Genes tend to carry a general risk for eating disorders rather than a specific risk for one type of eating disorder. (Nolen-Hoeksema 2014)Typically people who have a genetic tendency toward perfectionism, sensitivity, and perseverance may be more prone to developing anorexia.(Causes of Eating Disorders 2014) There is also evidence that serotonin which is a chemical of the brain involved in depression, may cause anorexia. Research also shows that that neurotransmitters neuroepinephrine are severely diminished in people with anorexia nervosa. The hypothalamus also plays a central role in regulating eating and disordered eating behavior may be caused by imbalances in dysregulation of any of the neuro-chemicals (norephinephrine, serotonin, dopamine, cortisol, and insulin) involved in the system or by structural or functional problems in the hypothalamus. (Nolen-Hoeksema 2014)

Psychological causes: Some emotional characteristics may contribute to anorexia. Young women may suffer from OCD traits make it easier to stick to strict diets and forgo food despite being hungry. (Nolen-Hoeksema 2014)

Eating disordered individuals often use their disorders as a way of coping with overwhelming emotions. Some psychological issues that often correlate with eating disorders include, depression, low self-esteem, damaged self-worth, and have an incapability to manage their emotions. Eating-disorder behaviors such as anorexia nervosa may sometimes serve as maladaptive strategies for dealing with painful emotions. Another psychological cause to anorexia nervosa can also be explained through cognitive factors. (Nolen-Hoeksema 2014) When the body that comes from social pressure (environmental cause) to achieve a certain shape or weight is combined with low self-esteem and perfectionism. The result is a toxic mix (psychological and environmental) of cognitive factors that strongly predict the development of an eating disorder. (Nolen-Hoeksema 2014)

Environmental causes: Modern Western cultures emphasizes thinness. The media has images of thin models and actors which causes people to idealize thinness. Peer pressure may also cause people to develop the desire to be thin and create anorexic behaviors. (Causes of Eating Disorders 2014) We live in a society that reinforces the idea to be happy and successful we must be thin. A study done by Hilde Brush argued that anorexia nervosa often occurs in girls who have been unusually "good girls"-high achievers, dutiful, and compliant daughter who are always trying to please their parents and others by being perfect. (Nolen-Hoeksema 2014)

There are many different psychotherapies and drug treatments for people with eating disorders. It is often difficult to engage people with anorexia nervosa through psychotherapy because they highly value their thinness. (Grohol 2006) Psychotherapy can help many people with anorexia but it is usually a long process. Cognitive-behavioral therapies are often the most researched therapy for anorexia. The clients overvaluation of thinness is confronted, and rewards are made contingent on the persons gaining weight. (Nolen-Hoeksema 2014) The patient may also be taught relaxation techniques to use when they become extremely anxious about ingesting food. (Nolen-Hoeksema 2014)

There are also biological therapies were people that suffer from anorexia can take selective serotonin reuptake inhibitors (SSRI's) such as Prozac. These drugs appear to reduce binge-eating and purging behaviors. Antidepressants are often used to treat anorexia and it results in reducing symptoms. (Nolen-Hoeksema 2014) Olanzapine which is an antipsychotic is also used to treat anorexia nervosa and is used to increase weight in people suffering from the results of starvation and malnutrition. (Nolen-Hoeksema 2014) 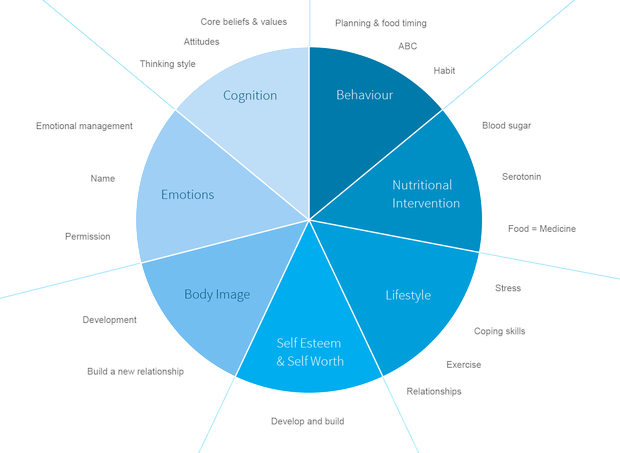 Myth 1: Individuals with anorexia are just trying to get attention

People do not develop anorexia as a way to seek out attention. (Shepphird 2009)

Myth 2: Anorexia is about vanity.

Myth 3: People choose to be anorexic

People do not choose to have anorexia and it is a serious psychiatric illness. (Shepphird 2009)

Myth 4: Eating disorders are primarily about food and weight

Anorexia can develop in anyone from any racial, ethnic or economic background. (Shepphird 2009)

Myth 6: People with anorexia do not engage in binge eating

People with anorexia often binge after eating through the use of laxatives, vomiting, or excessive exercise. (Shepphird 2009)

Myth 7: A person cannot have anorexia if they eat three meals a day

A person may also limit the types of foods eaten or the amount of food eaten and still have three meals a day. (Shepphird 2009)

Myth 8: You can't die from anorexia if you keep your body strong

People can die from anorexia even if they keep their body strong. Medical complications of starvation and malnutrition are real. (Shepphird 2009)

Myth 9: Anorexia is all about control

Anorexia serves as a complex distraction from other painful, seemingly unmanageable feelings or events. A person with an eating disorder does not know of other ways to cope with their feelings, but most would change this if they could. (Shepphird 2009)

Myth 10: Anorexia is just a phase.

Anorexia is never normal behavior. It is an eating disorder that needs serious attention. (Shepphird 2009)

www.britannica.com
There are many misconceptions about anorexia, and I highlight the ten most common myths in the following post. The information derives from my new book, 100

What to look for in a Therapist

Seeking help for eating disorders is hard work and it can be challenging enough without having to face the uncertainty of medical evaluations. Finding the right kind of health care provider is vital to a person success in keeping an eating disorder under control. (National Institute of Mental Health 2007)

In order to obtain a proper diagnosis of an eating disorder, a person should visit a licensed psychologist or another mental health expert. This person might hold a doctoral-level degree in psychology, or the person might hold an advanced degree in social work, and the person might continue to provide mental health care as treatment moves forward. (National Institute of Mental Health 2007) Some professionals take extra courses in eating disorders and their treatment, and they obtain certification through the International Association of Eating Disorder Professionals (IAEDP) These practitioners may refer to themselves as Certified Eating Disorder Specialists (CEDS). (National Institute of Mental Health 2007)

Are you or do you know someone suffering from Anorexia Nervosa?

Individuals struggling with eating disorders are intelligent, genuine, and passionate and have limitless potential. Trust that there is life after an eating disorder and there is help and don't hesitate to seek medical attention.

If you know someone suffering from Anorexia Nervosa your loved ones often feel stuck and are terrified of saying the wrong thing. Through therapy, multi-family education groups, family meals, and ongoing support, we can help.

If you or your loved one is suffering from Anorexia Nervosa or any other eating disorder please contact us on our referral line at: 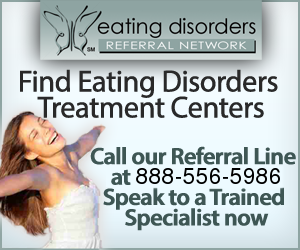