Thursday, October 24th was a busy day at DHS. Sophomore and freshmen students took the Pre-ACT in the morning, then attended 3rd and 4th block classes in the afternoon. Approximately half of the junior class attended the annual field trip to the national World War I Museum and Memorial in Kansas City. Over 90 juniors attended a college visit to either Emporia State, Kansas University, Pitt State, or Missouri Western. Most of the senior class explored future opportunities through a job shadow or individually planned college visit; however, 40+ participated in a community service activity. These students were assigned to help out at Starside Elementary School, Lexington Trails Middle School, Growing Futures Early Education Center, or the Downs Syndrome Guild of Greater Kansas City. We are thankful to our staff for assisting us in providing these opportunities for our students – and thankful to our students for representing DHS well.

We’d like to recognize Coach Justin Hoffman for being named United Kansas Conference (UKC) Tennis Coach of the Year. The Girls' Tennis Team won the conference championship this year, and Justin was honored with the recognition. Great job, Girls' Tennis!

Semester final exams are scheduled to begin Monday, December 16th, and end Thursday, December 19th. Winter Break begins on December 20th. For the purpose of consistency, clarity, and the importance of finals, if students have to leave town prior to and/or during finals week, they will need to work with the teacher to make up the final within two weeks of their return (not before).

Click this button for Important Information, Events, and Dates. 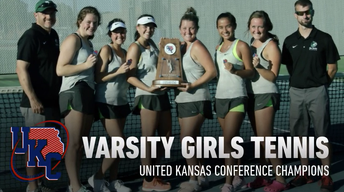 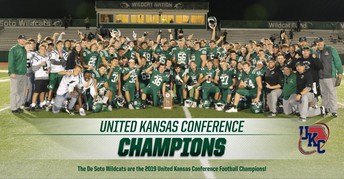 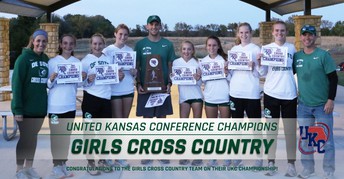 Teachers of the Month Drew Proctor and Solitaire Ware 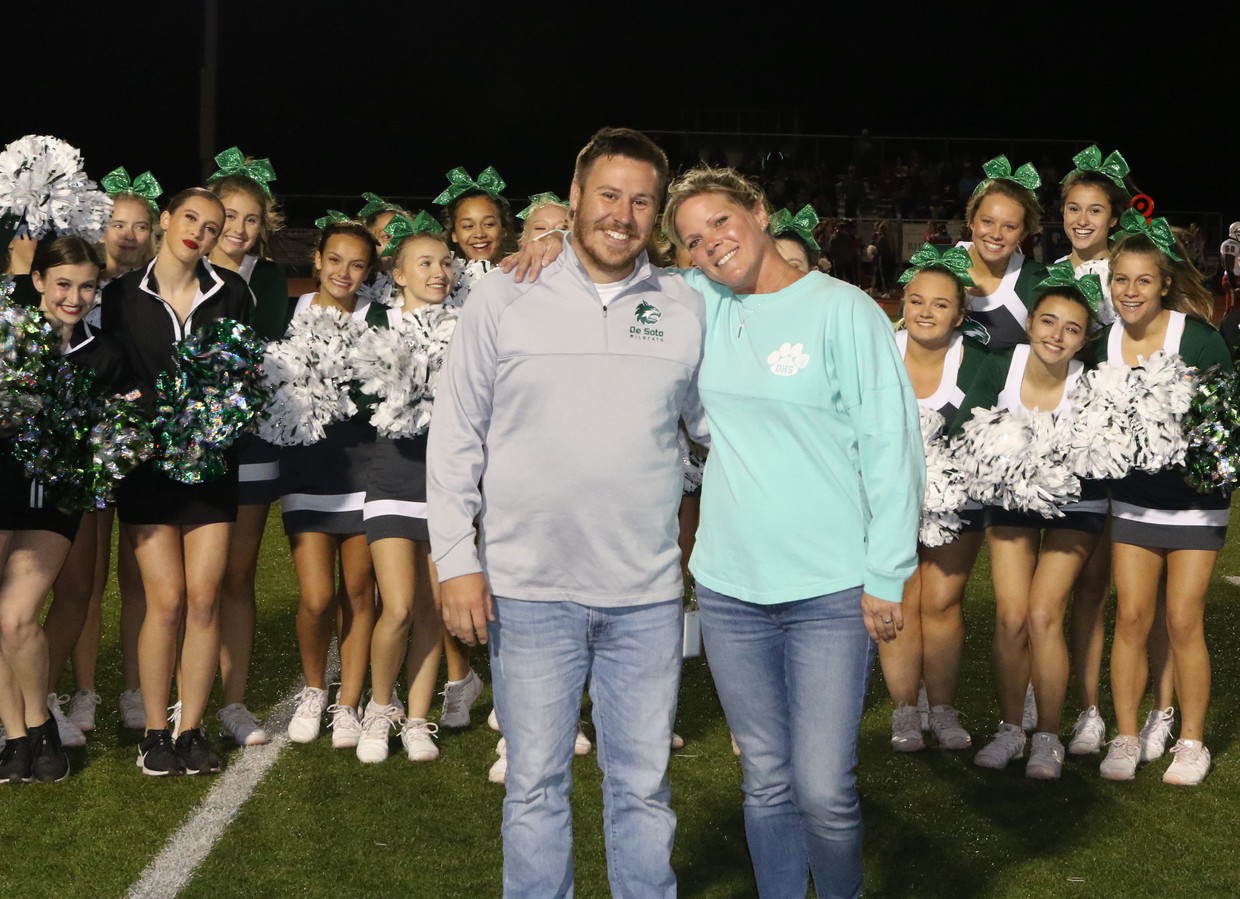 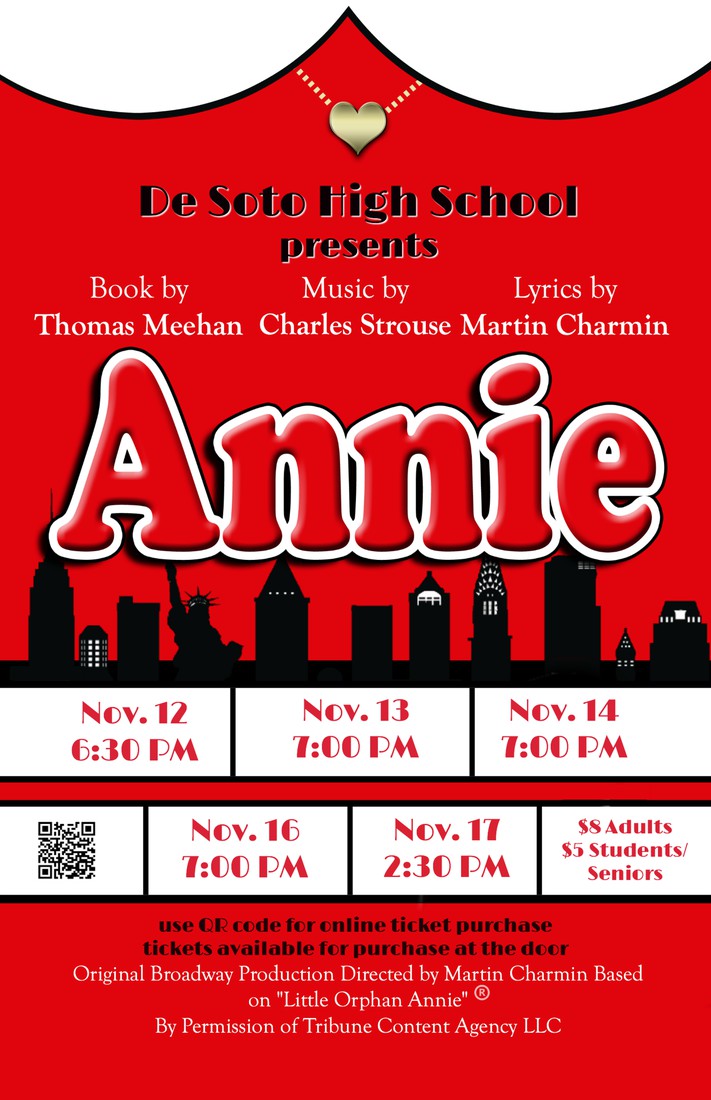 Click this button to find our upcoming events throughout Wildcat Nation!

De Soto High School is providing time and space for students to collaborate and study after school. Study Tables will take place in the Student Union Monday through Thursday from 3:00 pm until 4:00 pm. Students will have the opportunity to give and receive academic assistance from classmates. this supervised time is intended to support students in pursuit of academic success. 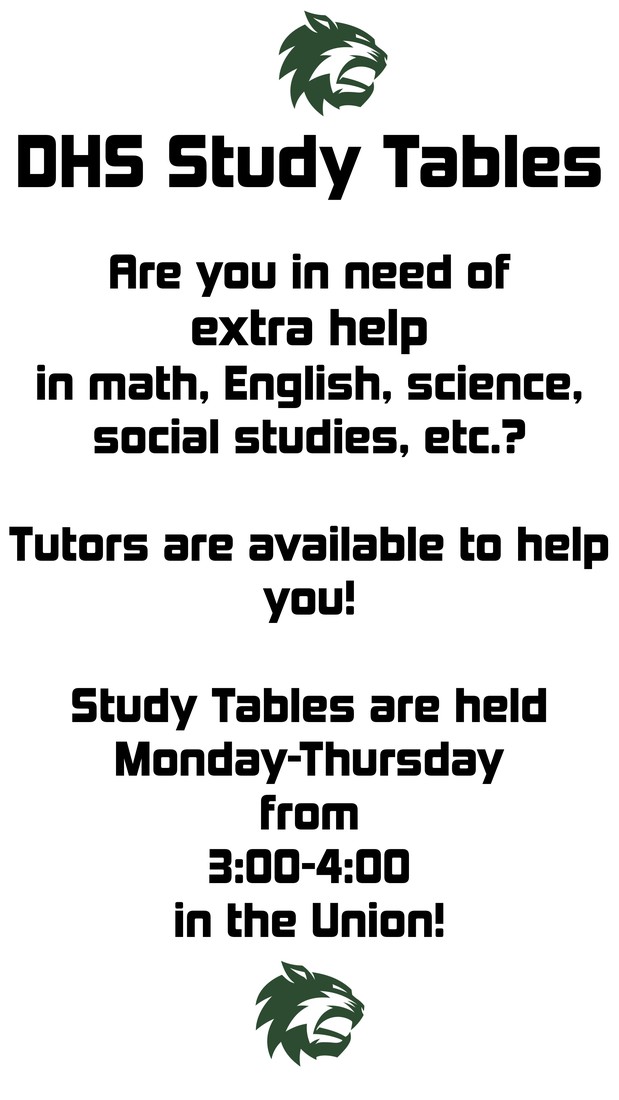 Students who are enrolled in DHS Classes that count toward college credit, need to be aware of the upcoming deadlines. Please visit the College Credit/Dual Enrollment page for more information

For more information on each of these programs and how to enroll please click here.

K-State Engineering is offering free events in the Kansas City area for high school students who are interested in the engineering field. For more information and to register for the event please visit: http://engg.k-state.edu/engineering-night

Looking for money to help pay for college? Check out the DHS Student Services Scholarship page! Throughout the year scholarships will be posted that are available to seniors. There is also a “Scholarship Search Tips” that can help aid the search process. Click here to go to the page.

If your student will be going on a college visit, students must fill out a College Visit Form. Forms are available in Student Services or online by clicking here. Students are to take the form with them on the day of the visit and bring it back signed by an admissions representative. 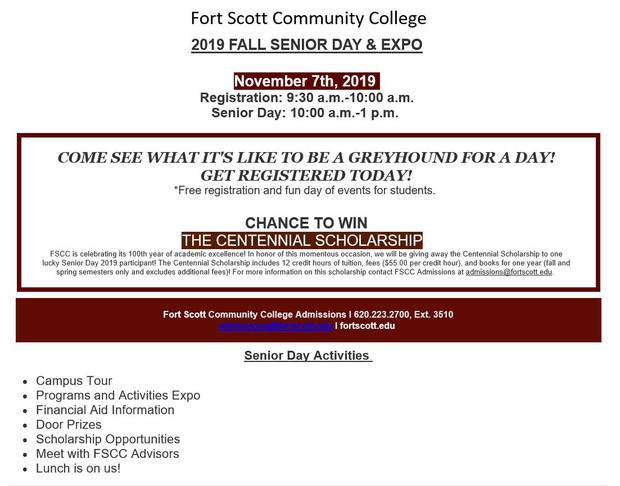 College Board has made some changes in regards to exam registration. In the past, students registered in the spring. Starting with this school year, AP exam registration will take place during the month of October. Students will need to fill out an AP exam registration form, that will be available after October 1 and pay the $94 per exam fee to DHS no later than November 1st.. All AP teachers will be given the registration form to distribute to their AP students. For more information, contact, Mrs. Johns at cjohns@usd232.org.

The FAFSA (Free Application for Federal Student Aid) opens October 1st. This is the form that current senior students and parents fill out for federal aid for college. Federal Aid comes in the form of Grants, Loans, and Scholarships.

If you are looking for assistance with the FAFSA, JCCC is offering an event. They are offering an opportunity for students to get FREE help with their FAFSA! The event is going to be Tuesday, November 5th, 2019 from 6:30-8:30 pm. This event is open to the public and will be held on the JCCC campus, in the Regnier Center. More event information including RSVP and a map can be found online: www.jccc.edu/freefafsa. 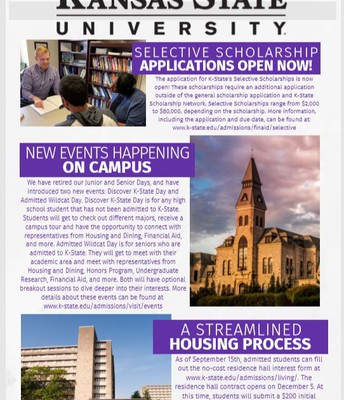 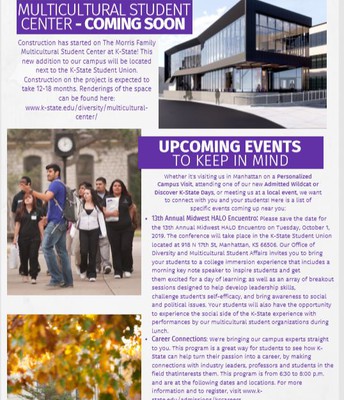 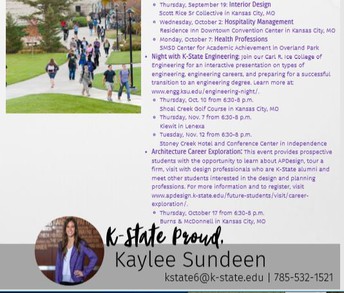 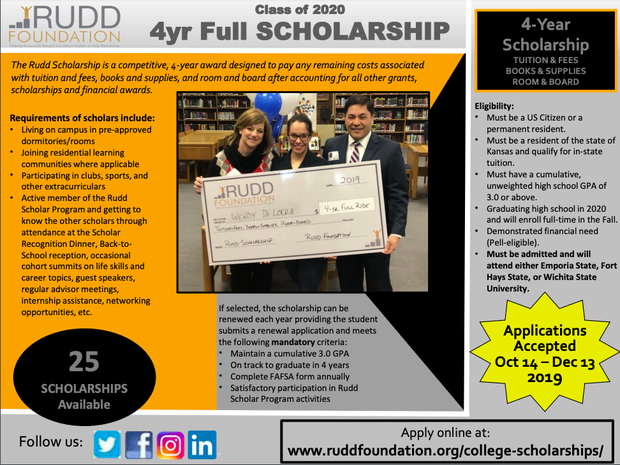 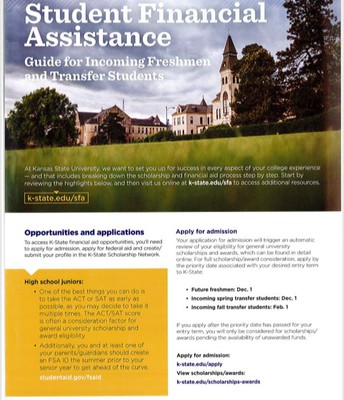 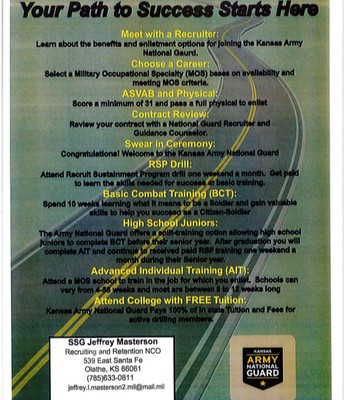 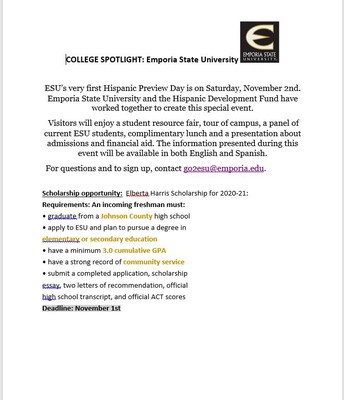 HSLC is a three-day adventure into leadership exclusively for high school juniors from across the United States. The purpose of HSLC is to equip, empower, and inspire high school students with valuable leadership skills that will benefit them in their daily lives and help them impact their schools. Students will leave the conference embodying characteristics that will help them become productive, efficient leaders. Please watch this video: https://vimeo.com/317874613

The conference will be held on February 14-16, 2020, at the University of Oklahoma in Norman, Oklahoma. HSLC 2020 applications open NOVEMBER 5TH, 2019, and can be accessed at hslc.ou.edu. Students do not need to be involved in Student Council and/or leadership. This conference is for ALL students in organizations, clubs, and activities.

The High School Leadership Conference provides full and partial tuition waivers for students in need, so they are able to attend the conference.

Note: Students do not have to be interested in attending the University of Oklahoma. The university is simply our hosting site, and all students are encouraged to apply.

For information regarding DHS Graduation please click this button. 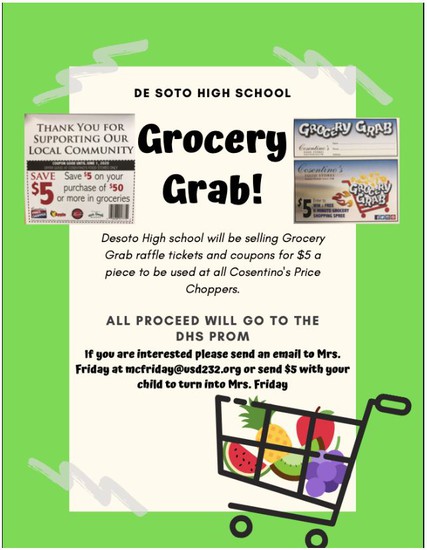 Do you need to replace a bed in your home? Now is the time! The DeSoto High School Band & Choir Programs are hosting a one day Mattress Sale Fundraiser at DeSoto High on Saturday, October 26th from 10AM-5PM. There will be 30 different models on display for you to try from name brand companies like Beautyrest and Therapedic. Simply find a bed you like, and place an order at the event. All beds are brand new, available in all sizes, and come with factory warranties! There will also be pillows, sheets, mattress protectors, frames and even adjustable bases available as well! Best of all, prices are less than retail stores! Mention this announcement and receive free delivery with any mattress purchase!
Cats Closet Letter Jacket Orders 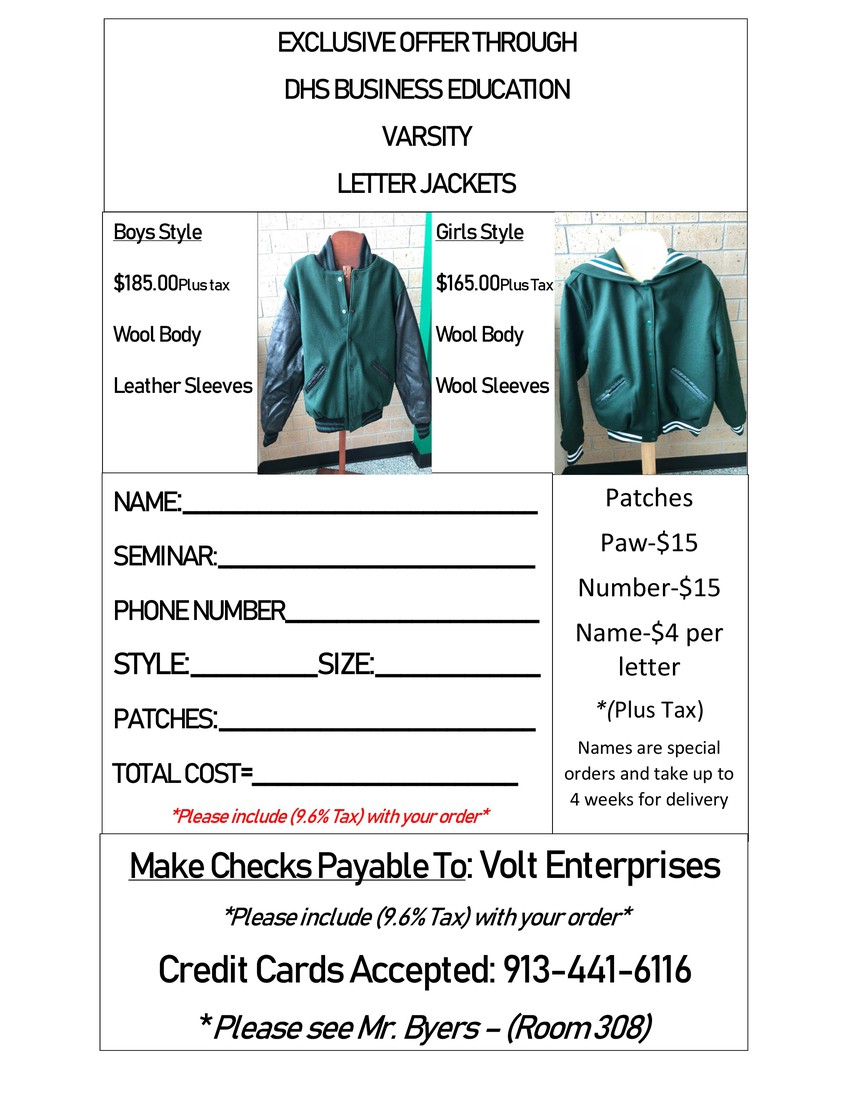 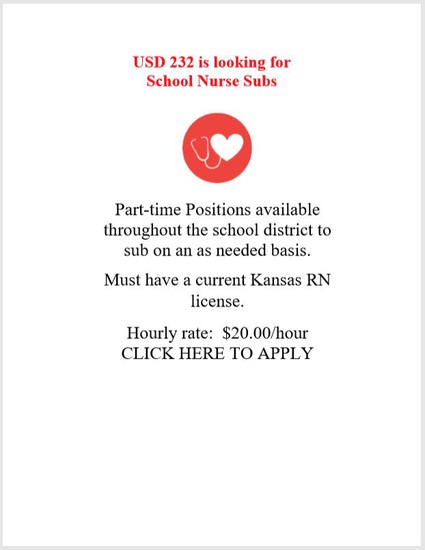