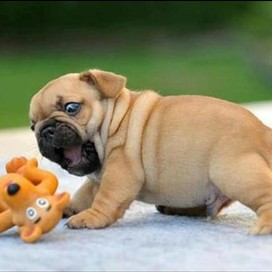 By: Emma Marshall and Madison Saverino

By: Emma Marshall and Madison Saverino 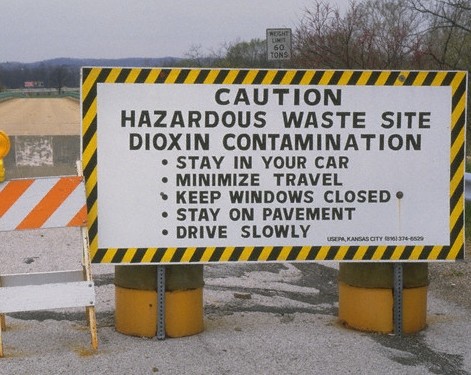 1982 in Times Beach, MO-residents had to evacuate because of illegal waste dumping.

The CDC told people that live in Times Beach that their town was contaminated with dioxin that was sprayed on unpaved roads, and the town will have to be evacuated and demolished. In 1985, the town was officially deserted.

In 1972, town officials paid a local-waste hauler, Russel Bliss, was paid 6 cents per gallon, to spray the roads with oil. The people of Times Beach loved the purple stuff and were not aware of how it was toxic, until horses started dropping dead. Soon people got sick. In 1979, the EPA came to Times Beach and took soil samples. In 1982 the agency announced levels of dioxin.
Iconography

How did this affect people, animals, forest, etc? 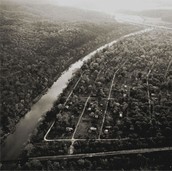 A view point of Times Beach 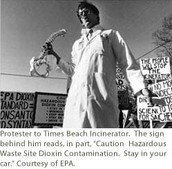 In 1999, Times Beach was cleaned up and reopened as the Route 66 State Park, and is a reminder of how much damage we can do to the environment. Though, critics believe that there is still toxic waste, the EPA stands by it's results of clean-up.

What We Would Do

To clean this up we would try to get residents in the area as far away as possible from the area with the dioxin(They already did that but I just put it here just to make it clear.) Then try to cut off the dioxin so it can’t get into other areas. We would also need to clean the soil with the right technology.