Thuymi is using Smore newsletters to spread the word online.

Get email updates from Thuymi: 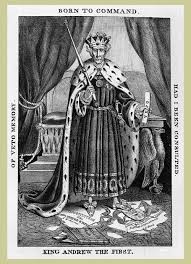 President Jackson is shown to be a tyrant like King George the Third. He abuses his powers and disregards the Constitution throughout his presidency. Because of his selfish deeds, the U.S. had to pay for his actions with an unstable economy, more issues of states' rights unjustified cruelty of Indians, and MUCH more.

www.whitehouse.gov
Andrew Jackson was the 7th President of the United States from 1829-1837, seeking to act as the direct representative of the common man.

Georgia laid laws on the Cherokee nation, trying to get the Indians to move just for profits that could be made from their land. Their plan was working until a man Worcester told the Indians that they could sue Georgia, for foreign affairs were to be dealt with the federal gov't, not the states. After all, the Cherokee nation is like a foreign country. The case reached up to the Supreme Court and it was decided by John Marshall that Georgia could not issue laws on the Cherokees. Therefore all the laws already created that were about the Indians was nullified. It was Jackson's job to uphold the Court's ruling, but what did he do? He ignored it, for he too, wanted the Indians gone. He said, "John Marshall has made his decision; now let him enforce it!" Now because of his lack of help, Georgia proceeded to move the Cherokees to Oklahoma in hopes to claim the land filled with gold and future profits. Thousands of Cherokees died from the journey and many suffered from diseases, the weather and the loss of their ancestors' home.

The Murder of the National Bank

The National Bank was an important part of our economy. It was established during Washington's presidency and helped our new, unstable economy. Jackson destroyed that piece of history behind Congress's back. He claimed that it only favored the rich and it wasn't needed. Congress decided it was needed and sent him the bill that pushed the bank's retirement. Again and again, Jackson vetoed it for his goal of getting rid of the bank, NOT for the people. When Congress went on vacation, Jackson seized his chance and withdrew the money from the bank and placed in state banks. Within weeks, the bank died and one of the U.S's supporting columns in the economy was taken down, leaving it unstable again.

South Carolina- "Is he really a man of the common people?"

People voted for him because he was one of them. He is a "common man". Yet he issued TWO heavy tariffs that greatly hurts the South!! Because of those tariffs, they lost lost money, for their economy was based on agriculture and had to pay more money for foreign trade. People are suffering in the South! South Carolina stood up and tried to nullify the tariffs, making threats of secession if their plans were interfered. Instead of realizing that those tariffs were wrong and should be lowered, Jackson threatened to have the U.S. Army attack them and to hang their leader with the power of the Force Bill! Only Henry Clay had common sense and solved the issue with the 1833 Compromise. Jackson claimed that he knew what the people needed, but he didn't know that the people needed lower tariffs.

Thuymi is using Smore newsletters to spread the word online.