How did they begin?

The beginning of the Crusades started began in 1095, when the Christain armies from Western Europe responded to Pope Urban II’s request to go to war against Muslims in the Holy Land. After the First Crusade, the Christians were successfull with the capture of Jerusalem. the Christians set up many Latin Christian states, even as Muslims in the region swore to start war to regain control over the region.

This is why the crusades began. The holy land meant everything to Christians and Muslims and they are still fighting over this land to this day.

Saladin was a great Muslim leader, he was born into a prominent Kurdish family, his father worked for the Turkish governor in northern Syria. Saladin spent his youth in Ba'lbek and Damascus, where he was interested in the study of religion rather than military training. Once Saladin became old enough, he got a job with his uncle Asad ad-Din Shirkuh, who was a military commander for Nur al-Din, the son and heir of Zengi. After Zengi’s death, three military expeditions into Egypt began, all led by Shirkuh, in a bid to stop the country falling to the Latin Christian (Frankish) rulers of the Kingdom of Jerusalem. Eventually Saladin became the sole master of Cairo and helped the Muslim community fight the Christians. Saladin managed to unite and lead the Muslim world and the Christians of western Europe were stunned by his success. 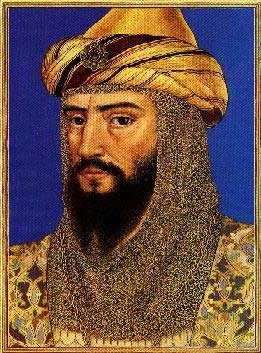 The major result of the Crusades was an increase in trade between the Middle East and Europe. That and a lot of deaths throughout Europe and the Middle East. Also, the real estate of the roman church had increased immensely, as all the lease contracts joined with illiterate crusaders short of cash included a term which allowed the church to pocket the land of all the knights and nobles who never returned to reclaim their assets, and pope Urban II fell from power.

Map of the Crusades 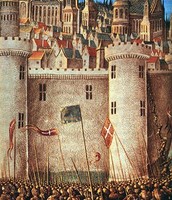 Fighting during the Crusades 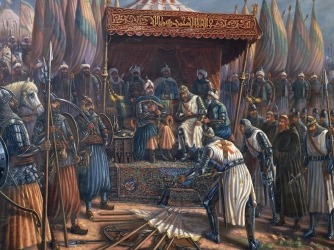 Did the crusades effect the way Christians and Muslims view each other today?

How does religion effect conflict?