How could scientists use a footprint to tell how tall someone was?

People come in all shapes and sizes. But scientists know a few rules that most bodies follow. They are rules about proportions, or how large one body part is compared to another. For example, it turns out that most people are about seven times as tall as the length of their foot! If forensic (detective) scientists find a footprint in the dirt, they will have some idea how tall that person was.

Were you surprised by any body rules? Did you and your friends get the same results? Think of how these rules could be used by forensic scientists, artists, and others. What are some problems with using these rules?

Brain Blaster: If someone was 21 feet tall, what would be the length of their foot?

Yuck, What Happened to My Apple? How Food Wrappings Affect Spoilage

Ever cut an apple into pieces and let some pieces sit out for a while? After a few hours, you may have found that the apple was less appealing than when you first ate it. The apple may have changed in appearance; it may have turned brown, shriveled up a little, felt and smelled different, and no longer been tasty.

Apples turn brown because of a chemical process called oxidation, which happens when oxygen interacts with another substance. In the case of the apple, when it is cut, oxygen can interact with certain proteins, called enzymes, in the flesh of the apple. These interactions cause many other interactions, which eventually lead to the forming of brown-colored chemicals. These chemicals are what make the cut apple turn brown over time.

As a piece of apple turns brown, you may have noticed that it can also shrivel up a little, or desiccate. Desiccation is the process by which something loses water and dries up. The skin of the apple helps keep liquid inside of the apple, but when the apple is cut open, its skin can no longer protect it, and it slowly loses water. Unless it is specially prepared, a desiccated piece of apple is not nearly as appealing as a plump, juicy piece of apple. Watch this time-lapse video to see what happens to two apple halves when they are left out in a room for six days.

If a piece of apple is left out long enough, it may spoil. Spoiled food can look, feel, and smell unpleasant, and can make you very sick if you eat it. Food becomes spoiled because microorganisms start living in the food. These microorganisms can include different types of fungus, such as mold and yeast, and bacteria. They can cause food to decay and develop unpleasant odors, tastes, and textures. Sometimes food can even look perfectly good to eat, but can harbor pathogenic microorganisms that can cause illness and are hard to detect. Examples of pathogenic microorganisms include Salmonella and some types of E. coli bacteria.

In this cooking and food science project, you will investigate which types of food wrapping keep sliced apples the freshest in the refrigerator: aluminum foil, wax paper, plastic wrap, or plastic sealable bags. Throwing away food is a waste of money. Save your family money by investigating how to keep your food fresh longer.

Solid to Liquid to Solid

Watch the transition from solid to liquid to solid in this science project for kids on states of matter -- and make something good to eat. Solids can change into liquids, and liquids can change into solids. Make ice pops with orange juice, and you can see both transformations.

In this activity, you will set up three simulated “clouds” representing three different cloud types. Students will use different methods to estimate the “precipitation” contents of each cloud type. Each method is roughly analogous to methods actually used in weather forecasting. Finally, the “precipitation” from each cloud will be released, and the students will compare their estimates to what is actually experienced on the “ground.” In addition to gaining an appreciation of weather forecasting issues and technologies, students will practice math skills, including estimating, percentages, ratios, and averages. 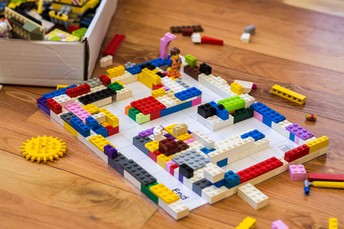 Now that you've had a couple of exercises to get a feel for how programming works and how it is important to think through each individual step, now is time to play with a robot! This is a simulation activity for the Ozobot robots.

There are 10 levels to this activity, increasing in difficulty as you progress. See if you can complete all the levels!

Other Science & Technology Information to Pass On