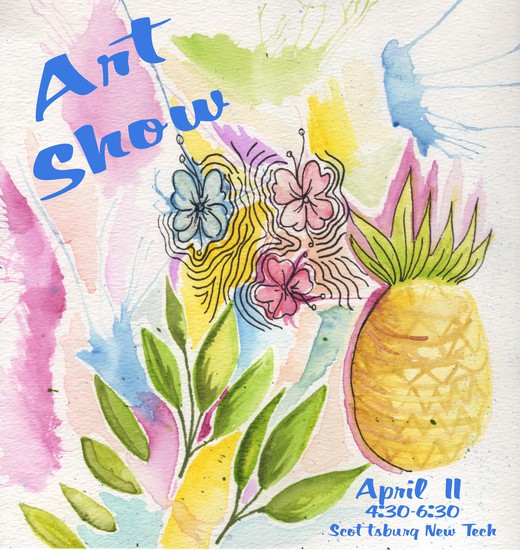 Plan to come out now to show your support for local students and the art world. We hope to see you there!

SHS Partners with the Kiwanis

On Tuesday, April 5th, the Scott Co chapter of Kiwanis International partnered with One Sight Vision to conduct free baseline vision screenings on SHS 10th grade students. This partnership addressed the need for high school age students to receive vision screenings which are not required.

166 students participated in the screenings. Many of them had not had a vision screening in several years. We are thankful to the Kiwanis and One Sight for providing this much needed opportunity to our students. 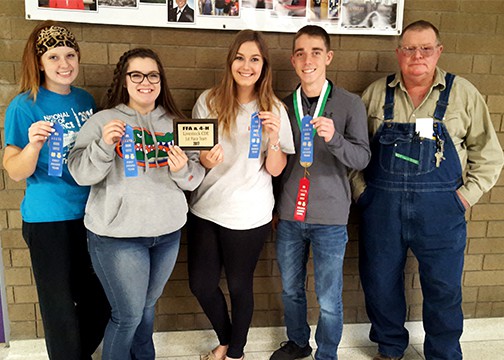 Thursday, April 6, the Scottsburg FFA Livestock Judging teams headed to Little York Stockyards in order to take part in the Area 2 Livestock Judging Contest. Members had to judge multiple classes of both Breeding and Market styled animals. These species included sheep, cattle, pigs, and goats. After the livestock judging, they wrote, memorized, and presented three different sets of reasons on select classes to the judges and were scored on how well they presented. Livestock Judging is a competitive contest in both 4-H and FFA, and takes a lot of time and dedication to learn all it entails.

Junior Emma Hall said "Livestock Judging is so much more than what people normally think.

You have to evaluate the animals, write a set of reasons WHY you placed them that way, and you also have recite your set of reasons to a judge. With Livestock Judging, members learn how to work well under pressure, evaluate different species of livestock, and also learn how to public speak. I have competed in the Livestock Judging CDE with the Scottsburg FFA for three years now, and this will be my second time traveling to state at Purdue University in May."

These are all huge accomplishments, and we congratulate all the team members, as well as their advisor Kenneth McMichael, for an excellent season." 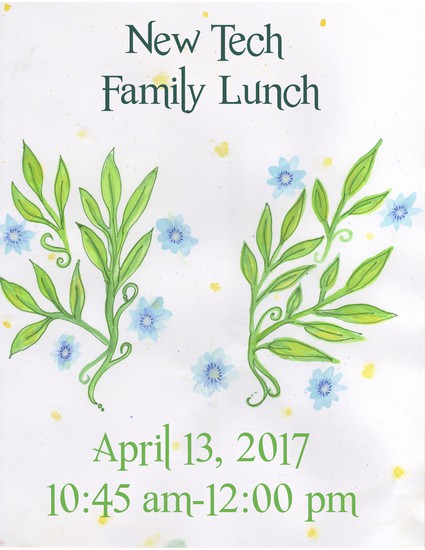 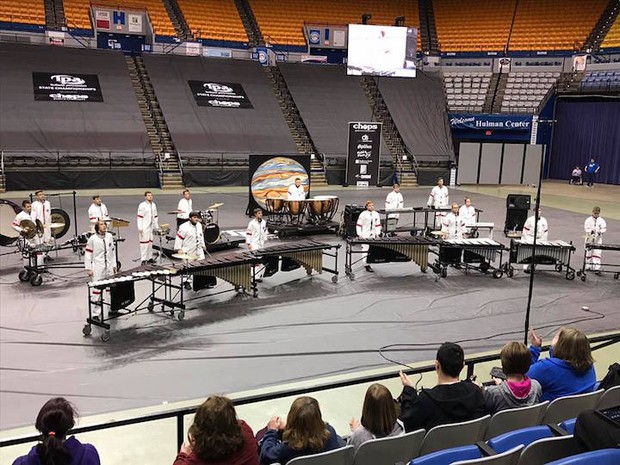 On Saturday, April 1st, the Scottsburg Winter Percussion traveled to Indiana State University in Terre Haute, IN to compete in the Indiana Percussion Association (IPA) State Finals. IPA divides their association into 2 divisions: Concert, which does not include marching or movement, and Movement, which incorporates marching and drill formations, very similar to marching band.

The two divisions are then broken down into 3 classes devoted to skill level: A class for basic skills and developing fundamentals, Open class for intermediate level skills, and World class for the most advanced. Scottsburg came away with a 7th place finish out of 14 groups in Percussion Scholastic Concert A class.

Overall for the season, the group finished 7th out of 17 total groups in their class. In addition to the placement, the group received their highest score of the season to date, an 83.45 out of 100. This State Finals appearance marked the first time since 2007 and the 5th time overall in school history that Scottsburg has earned the honor of competing at the state level.

At the state finals event, the top 3 groups in each class receive a medallion honoring their excellent placement: Bronze for 3rd, Silver for 2nd, and Gold for 1st. While Scottsburg finished 7th, their score was less than 2.5 points away from 3rd place. This is an excellent showing for our group with it being the first trip to State Finals in 10 years. Congratulations to the students, staff, and Mr. Turner, their director! 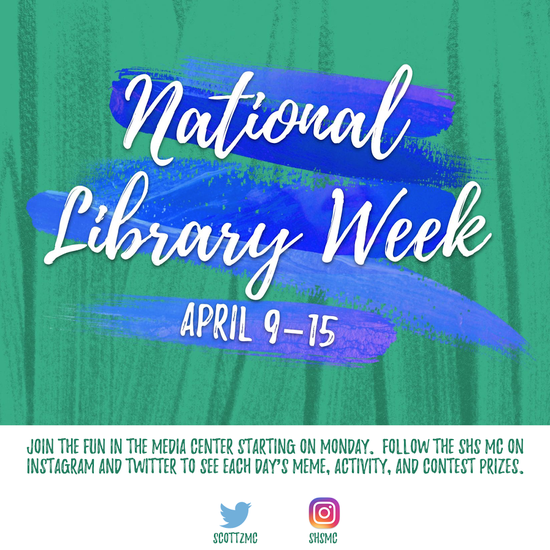 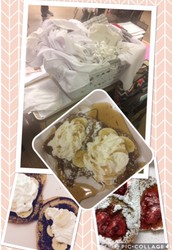 Laundry, laundry, laundry!! With six classes cooking each week we have roughly 120 aprons, towels, and dish cloths to wash each lab, but students are learning valuable skills. This week Advanced Nutrition and Wellness students made french toast, which is a simple meal that students could make for themselves in college or in the future. Most families typically have the ingredients on hand, and the cost is low. Students were also encouraged to consider visual appeal when topping their french toast.

While french toast may seem simple, many students are not cooking at home with their families anymore. They are lacking basic recipe reading, kitchen safety, and cooking skills. Please encourage your students to cook at home and learn these valuable skills that can save money, improve their health, and help develop healthy family experiences. 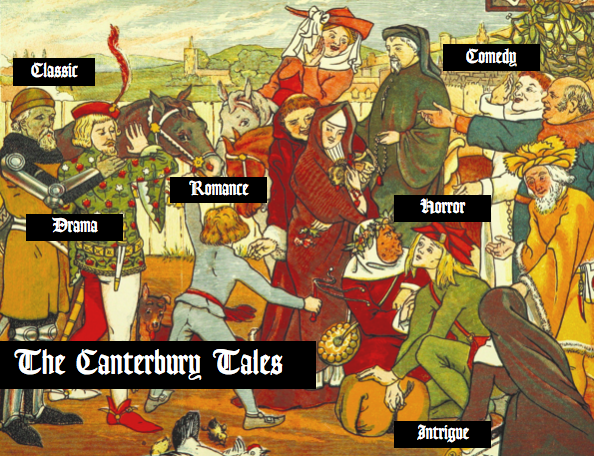 Tickets for The Canterbury Tales on sale

The Scottsburg High School Drama Club will be performing The Canterbury Tales, adapted by Lindsay Price, at 6:30 p.m. April 29 and at 2:30 p.m. April 30 in McClain Hall. Tickets are $5 and will be available for purchase at the door or through a member of the SHS Drama Club.

In this adapted version for the stage, The Canterbury Tales tells how a group of pilgrims travel from London to Canterbury to visit the shrine of Saint Thomas Becket. Along the way, the pilgrims have a story-telling contest to see who has the best tale. The original literary classic was written by Geoffrey Chaucer during the Middle Ages. 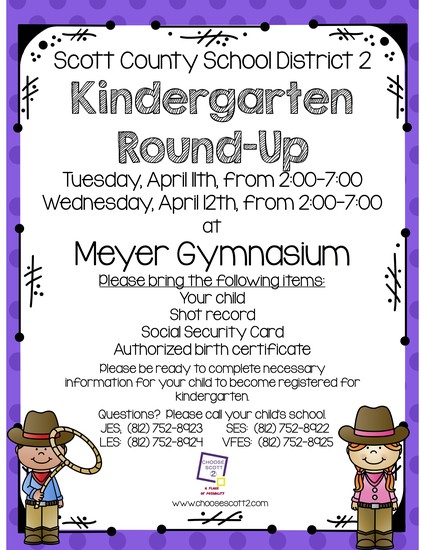