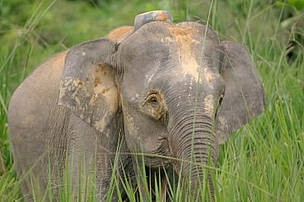 They Borneo Pygmy Elephant is the smallest elephant species alive at the moment, with a height between 7-10 ft. They have cute faces with over sized ears, noses, and tails. Their tusks are typically small and most females do not even have tusks.

The Borneo Pygmy Elephants as the name suggests, are found on the island of Borneo in Southeast Asia. The Area falls into the Tropical Rain forest biome. The weather is hot and humid. The elephants are not territorial, but follow strict migration routes determined by the monsoon rain.

The elephants live in herds and migrate together. They eat mainly grasses, but are also known to eat other fruits and plants. Because of their size, they only have one natural predator, the tiger. They mainly feed on small calves, because the adults are able to defend themselves. Human poachers are also known to kill them for their ivory tusks.

The Borneo Elephants are in danger of extinction because of their rapidly diminishing numbers. The main reason for this is the massive deforestation of the Borneo rain forest. Large mammals require a large amount of food, an amount that is getting harder to find. To make matters worse, poachers hunt the elephants for their ivory tusks. They have been on the endangered species list since 2005 and deserve to be saved. Being one of the oldest animals in the region, we ought to protect the elephants.

Follow Wesley Viera
Contact Wesley Viera
Embed code is for website/blog and not email. To embed your newsletter in a Mass Notification System, click HERE to see how or reach out to support@smore.com
close