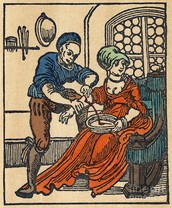 Up until the 1800's bloodletting and the use of potions that had no proven affect on infection were used. These methods would sometimes do harm than good.

Ancient Greece- The Greeks use moldy bread as a way to treat infected wounds.

Civil War- over 2/3 of all casualties through the civil war were killed by infection and diseases. Amputations was commonly used to prevent the spread of infections diseases.

After returning from a summer vacation in Scotland, Alexander Fleming, a bacteriologist in St. Mary's hospital, discovered that a petri dish with bacteria colonies in it was contaminated with the mold Penicillin. Most scientists would have discarded this, but Fleming studied it closer and found that the mold was killing the bacteria. It took him weeks to collect enough mold to claim his findings. Unfortunately Fleming didn't have both the resources and chemistry background to take the next steps in his research. 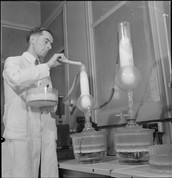 The Impact of penicillin

The advancement of antibiotics in the 1900's greatly impacted the world. The population has increased greatly and people are living longer.Before ,a simple cut could result in death. This medical advancement could however cause bacteria to become resistant to antibiotics. Fleming had warned this at his Nobel prize speech. Despite this the age that Fleming, Florey and Chain had ushered in will continue to change the world for a while.