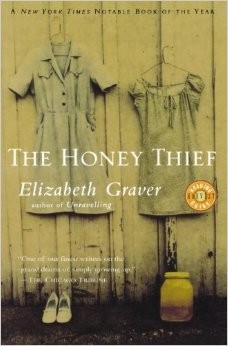 The Honey Thief (published in 2000) was written by Elizabeth Graver and takes place in a small town in upstate New York. It occurs during the early 2000’s and follows the story of Miriam and her eleven-year-old daughter, Eva, after they move away from the bright lights of New York City to the quiet countryside in order to pursue a “normal, everyday life”. Eva had been caught shoplifting for the fourth time and Miriam, frustrated and a little terrified, decided that moving away from the city might stop her daughter from continuing to act out.

The novel switches points of view between Miriam and Eva, allowing the reader to understand both sides of their relationship and the background of their family. At the beginning of the novel, Eva is extremely upset with leaving New York City. She continuously lashes out at her mother, picking fights with her and challenging her on every decision she makes. Eva is angry that her mom forced them to move and then abandoned her with a lousy babysitter every day while she went to work. However, as the novel progresses, Eva befriends a beekeeper whom begins to teach her about his trade, and in turn, also teaches her responsibility and takes her mind off the possibility of stealing again. Throughout the novel, the reader sees several different sides of Eva in regard to her relationship with her mother. While she often rebels and treats her mother with disdain and frustration, Eva also desperately craves her mother’s affection and attention. She feels abandoned and unloved due to the lack of time her mother chooses to spend with her. By the time the book draws to a close and Eva is accidently attacked by the bees, resulting in a dangerous allergic reaction, Eva has begun to allow her mother in and listens to her instead of constantly lashing out.

Miriam’s point of view in the novel centers on her background and relationship with Eva’s father, Francis. The reader learns how they met, fell in love, and the start of their family with the birth of Eva. However, you also learn about the dark side to this family; that is, Francis has bipolar disease that was left untreated and resulted in him having a mental breakdown. The author paints a picture of a terrified, confused, and anxious Miriam who takes on the stress and burden of his disease until he eventually commits suicide. Due to her past, Miriam is frightened that Eva will also develop Bipolar disease and that is why she gets so frightened about her shoplifting and acting out. Miriam views Eva as a little girl in need of protection, and in a way, she is scared of her own daughter out of fear of what could happen to her. She also grows frustrated with Eva’s constant bombardment of questions and craves the peace and quiet of when she was still little. By the end of the novel, Miriam begins to open up to Eva and explain to her about her past. She grows less strict and even allows her to look at and study bees even after Eva’s allergic reaction.

In conclusion, Miriam and Eva both view their move and the way they live their lives in different ways. Miriam sees work as a necessary tool to provide a better life for Eva, and maybe even escape from her problems that are surfacing at home. Eva, in turn, sees her mothers’ job as a way to leave her behind and escape from the burden of being a mother. She grows angry at Miriam for spending so much time at work and believes that she doesn’t care about her anymore. This sends her to the refuge of the bees and her newfound friendship with Burt. This friendship ultimately ends up healing Miriam and Eva’s relationship, teaching them to how to be open and vulnerable with each other and grow closer.

How Burt took care of his bees

honeyfanatic.com
"Burt found himself trying to picture them as a very old or very young - a brown-haired mother holding a black-haired baby; an old woman with a middle-aged daughter, they are walking down a sidewalk, the daughter taller now, grown into herself; she is talking, laughing, her head thrown back..." (Graver, 2000)

Graver, Elizabeth. The Honey Thief. Mariner, 2000. Print
Paste in your blog/website to embed.