By: Jackie, Noah, Stephen, and Waleed

By: Jackie, Noah, Stephen, and Waleed 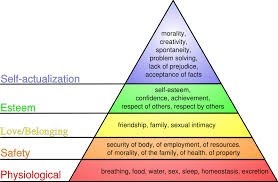 How the Hierarchy Begins

The drive reduction theory states the organism have physiological needs that create aroused psychological states which drive us to reduce, satisfy or satiate those needs. Maslow's hierarchy of needs determines in what order we fulfill those needs, starting with the base of the pyramid being most essential and the top of the pyramid being the least essential need to fulfill.

Safety: prescription for humalog and lantus

Esteem: graduate from engineering college and university of Madison with honors

While some research showed some support for Maslow's theories, most research has not been able to substantiate the idea of a needs hierarchy. Wahba and Bridwell reported that there was little evidence for Maslow's ranking of these needs and even less evidence that these needs are in a hierarchical order.

Other criticisms of Maslow's theory note that his definition of self-actualization is difficult to test scientifically. His research on self-actualization was also based on a very limited sample of individuals, including people he knew as well as biographies of famous individuals that Maslow believed to be self-actualized, such as Albert Einstein and Eleanor Roosevelt. Regardless of these criticisms, Maslow’s hierarchy of needs represents part of an important shift in psychology. Rather than focusing on abnormal behavior and development, Maslow's humanistic psychology was focused on the development of healthy individuals.