Onchocerciasis is a tropical disease that affects the skin and eyes. In 1917, the disease is published by Rodolfo Robles from Guatemala associated with subcutaneous nodules, anterior ocular lesions, dermatitis, and microfilariae. 99% of all cases are found in Sub- Saharan Africa. The risk of blindness due to Onchocerciasis used to affect 50% which lead to abandonment of numerous African river communities. The toll this particular infection takes on your body is rashes upon the the skin, eye infections (potential blindness), and nodules under the skin. The different forms of Onchocerciasis consist of; Erisipela de la Coasta, characterized by swelling of the face with erythema and itching. Mal Morando, characterized by inflammation and hyperpigmentation. Sowda, the localized type of Onchocerciasis. Leopard Skin, spotted depigmentation. Elephant, thickening of the skin. Lastly Lizard skin, thickened and wrinkled skin changes. 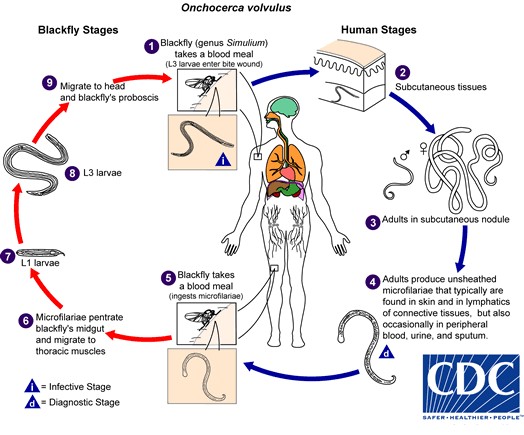 Upon the bite of a black fly it transmits an immature larvae of the parasitic worm named Onocherca Volvulus. Once in the human body, the larvae will form nodules of subcutaneous tissue where they mature to adult worms and reproduce. The worms lifespan is 15 years, and a mature female and release up to 1,000 microfilariae a day. The microfilariae move through the body and when they die the body's inflammatory system leads to a variety of skin and eye conditions.

18 million people have been diagnosed with river blindness. 99% of the 18 million are citizens in Africa. Most people who are at risk in acquiring Onchocerciasis live near streams or river where black flies flourish. People who travel for short periods of time(3 months) are generally not infected. However travelers for long periods of time such as missionaries, Peace Corps and other volunteers are most likely to become infected. (unable to locate a viable mortality rate)

For a doctor to diagnose the usually perform a skin snip biopsy. They use sclerocorneal biopsy punch or by elevating a small cone of skin with a needle and then shaving it off with a scalpel. Which in all removes about 2 mg of skin tissue. Usually over the iliac crest, the scapula, and lower extremities. Six snips are provide the most diagnostic sensitivity. Next the tissue is incubated in normal saline at room temperature for 24 hours to allow the microfilariare to emerge. Which is then identified microscopically. The snips are highly specific but the sensitivity can make you limited in the pre-patient stage infection. Performing polymerase chain reaction (PCR) of the skin snip can increase the sensitivity in these two situations, though it is not commercially available especially for the third world countries in Africa.

People infected by with O. volvulus should be treated to avoid long term skin damage and blindness. Doctors recommend the treatment ivermectin every six months until the patients eye or skin infection is healed ivermectin kills the larvae and prevents them from causing damage. However, it can not kill the adults. Doxycycline, which is a new treatment that kills the bacteria that the adult worms need to survive. Often they treat you with both. The medicine above is the cure. 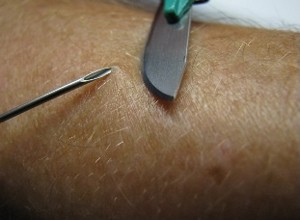 No vaccines and medicines are currently available to prevent this particular disease. The best prevention is self prevention from biting insects. Just as simple as wearing insect repellent on exposed skin. Also wearing long sleeves and pants during the day when they are prone to bite. But also mass distribution of ivermectin to all people living in areas where onchocerciasis is popular.