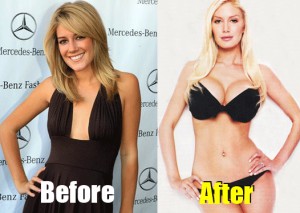 Heidi Montag is currently 26 years old. She gained popularity by being on the popular television show "The Hills". She also has a music album out. In 2010, Heidi made the decision to undergo 10 different cosmetic surgical procedures in a single day. But Heidi wasn't knew to the cosmetic surgery scene. In 2007, Heidi got rhinoplasty and a breast augmentation.

Heidi said shortly after her surgeries, "Nobody ages perfectly, so I plan to keep using surgery to make me as perfect as I can be. Because, for me, the surgery is always so rewarding.” After the surgery, Heidi acted as if this is exactly what she wanted, but now she seems to be singing to a different tune.
(Photo from a wordpress blog site)

abcnews.go.com
Part 1: Montag: "I wish I could just go back to the original Heidi."
Heidi was caught up in her surgeries for a month or so afterward. One day, she took a second and reflected on her situation. Heidi says she would never go under the knife again, and sometimes even wishes she could go back to the "old Heidi Montag". Her surgery took a toll on her relationship with husband, Spencer Pratt, and her mother. Heidi advises others who are looking in the direction of cosmetic surgery not to do it. The pain is not worth it.

Heidi, at the time of the surgeries, did not understand the consequences of her actions. She had no idea that she would have been in so much pain. Heidi was beautiful before her surgeries, and she still looks good. However, age makes cosmetic surgery look unnatural. The normal processes of aging happen to unaffected areas, but areas that have been injected and operated on look unnatural and, well, ugly. Only time will tell how Heidi's surgeries will affect her appearance.