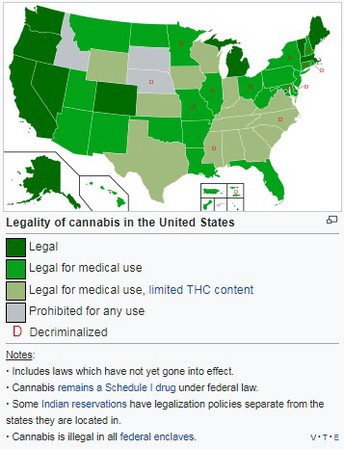 The Utah Medical Cannabis Act was passed into law in December 2018. The medical use of cannabis is legal (with a doctor's recommendation) in 33 states, plus the District of Columbia, and the territories of Guam, Puerto Rico, the Northern Mariana Islands, and the U.S. Virgin Islands. Fourteen other states have laws that limit THC content. Ten states have also legalized recreational use. Marijuana that is legally available for adults has multiple implications for adolescent substance use. Assumptions have been made and studies are underway on the idea that easier access, greater social acceptance, and possibly cheaper product may lead to an increase in underage marijuana use.

The American College of Pediatricians has warned of studies suggesting that adolescent marijuana use has been associated with impairment.

"Weekly marijuana use under age 18 years has been associated with an eight-point drop in intelligence among those who develop persistent dependence, while those with adult onset of comparable levels of use are less affected; importantly, the loss of cognitive capacity may not recover completely after desisting from marijuana use.1”

Legalization may also facilitate the introduction of new formulations of marijuana and with potentially higher potencies. There is also the danger of contamination. Last year in Utah 52 people fell ill after smoking what they thought was CBD oil but turned out to be an unknown synthetic cannabinoid (chemicals sprayed on herbs or plant products that can be vaped, smoked, or ingested).

Colorado’s recreational legalization hasn’t reported many problems but there is one unintended consequence that should be noted by neighboring states and EMS.

“Colorado state EMS has seen an increase in heroin use and overdoses. Previously, Mexican marijuana was the predominant product available and contained a tetrahydrocannabinol (THC) content of about 10%. Colorado growers refined their methods and are able to produce a product that contains almost 30% THC. Buyers opted not to purchase the Mexican marijuana due to the lower THC content, so the cartels simply adjusted their business model. They quit shipping in marijuana, started shipping in more heroin instead, and are selling the heroin cheaper than what one can pay for legal marijuana. Thus, EMS has seen an increase in heroin overdoses and deaths.2”

Do you know what to do when you run across underage marijuana use in the field? Are you familiar with the signs of marijuana overdose? What about a heroin overdose? Read on.

1. Implications of Marijuana Legalization for Adolescent Substance Use 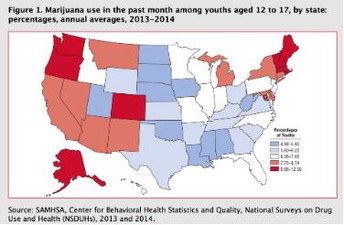 Marijuana, or cannabis, is the flower of plants Cannabis sativa, Cannibis sativa forma indica, and Cannibis ruderalis that originate in Central Asia and India. The active ingredients in marijuana include tetrahydrocannabinol (THC), cannabidiol (CBD), cannabinol, and tetrahydrocannabivarin. The psychoactive component is the THC, which acts on the CB1 receptors in the central nervous system. It affects the body in minutes when smoked and about 30-60 minutes when eaten. THC is highly lipid-soluble and the effects can last from 2 to 6 hours and detectible levels last in the body for days to weeks. Unlike THC, CBD does not act on the CB1 receptors and, therefore, does not have psychoactive properties. Common slang terms for marijuana include "pot," "grass," "dope," "MJ," "Mary Jane," "doobie," "hooch," "weed," "hash," "reefers," and "ganja."

There is evidence of marijuana use dating back more than 5,000 years ago in what is now Romania and evidence of medicinal use around 400 A.D. It was described in the United States Pharmacopoeia in 1850 and widely used medicinally in the 19th and early 20th centuries. Starting in 1950s, with the enactment of the Narcotic Control Acts, there were legal penalties for possessing marijuana. In 1970, marijuana became federally prohibited with the Controlled Substances Act. In 1996, California was the first state to permit its use medically under physician supervision. Since that time, 21 states have decriminalized marijuana.

Due to the lack of consistency and predictability in doses of both edible and inhaled forms of cannabis, consumption can often cause adverse effects. inhaled doses of 2 to 3 mg of delta-9 tetrahydrocannabinol (THC) and ingested doses of 5 to 20 mg THC impair attention, concentration, short-term memory, and executive functioning. Nausea, postural hypotension, delirium, panic attacks, anxiety, and myoclonic jerking can occur at higher doses. Psychosis has also been documented at higher doses. Signs on exam can include tachycardia, increased blood pressure, increased respiratory rate, dry mouth, nystagmus, and slurred speech. Inhaled marijuana can induce an asthma exacerbation and pneumomediastinum/pneumothorax.

Accidental toxicity can also occur in children, after ingestion of concentrated food products (doses from 5mg to 300mg have been reported) resulting in ataxia, excessive and purposeless motor activity of the extremities (hyperkinesis), coma, and respiratory depression.

Treatment is supportive. Make sure to maintain airway, breathing, and circulation and obtain glucose to exclude hypoglycemia. Certainly, if it is unclear whether it is an opioid overdose or cannabis, provide naloxone. Naloxone will not reverse marijuana-induced intoxication, but will help in the setting of opioid overdose. For severe agitation that is not responsive to verbal re-direction, benzodiazepines can be used.

Medical Use in Pediatrics

What the studies show regarding adverse effects

Many of the studies that have been done come from data pulled from recreational marijuana users. Short-term use of cannabis is known to result in impaired short-term memory, impaired coordination, altered judgement, and, at higher doses, paranoia and psychosis. Long-term or heavy use has been associated with altered brain development, cognitive impairment, poor educational outcomes, chronic bronchitis, and an increased risk of chronic psychosis-related health disorders (schizophrenia and depression). There is also literature describing associations with vascular conditions, such as stroke, myocardial infarction, and transient ischemic attack. Additionally, hyperemesis syndrome can occur.

Dai, Hongyingi and Hao, Jianqiang. Electronic cigarette and marijuana use among youth in the United States. Addictive Behaviors. November 19th, 2016. 48-54.

Hughes, A., Lipari, R.N., & Williams, M. The CBHSQ Report: State Estimates of Adolescent Marijuana Use and Perceptions of Risk of Harm From Marijuana Use: 2013 and 2014. Rockville, MD: Substance Abuse and Mental Health Services Administration, Center for Behavioral Health Statistics and Quality.

Intramuscular Administration of Naloxone by EMS

We are in the midst of a nationwide crisis related to opioid overdose and death, and Utah is no exception. Naloxone has been proven to be a safe, effective frontline resource for use by trained medical professionals and lay persons alike to combat the effects of narcotic overdose. To facilitate getting this life saving drug in the hands of people first on the scene, Utah has passed a number of laws that provide first responders the ability to administer Naloxone. In response to these changes and to ensure that first responders at all medical levels can carry and administer this safe, lifesaving drug, the Utah state Bureau of Emergency Medical Services has authorized protocols to allow EMT Basics to use naloxone in intramuscular (IM) as well as intranasal (IN) forms. The protocol and link are included below.

The protocol allows EMT Basics to administer IM/IN naloxone to a person suspected of experiencing a narcotic/opioid overdose. Advanced EMTs can administer IM/IN as well as intravascular (IV) and intraosseous (IO). Best practice in responding to the respiratory depression of a narcotic overdose is to restore breathing as soon as possible which is achieved by immediate naloxone administration and ventilatory support. To achieve this, Utah state law even allows nonmedical bystanders to administer naloxone both IM and IN. Thousands of laypersons in Utah have been trained and equipped with intramuscular naloxone rescue kits and have saved more than 2,200 lives as of 07/2018.

It is a priority statewide to increase availability and access to naloxone. The Utah State Opioid Task Force, the Attorney General’s Office, the Drug Enforcement Agency, the Utah Department of Health, the Division of Substance Abuse and Mental Health, and many community entities all support efforts to increase first responder use of naloxone to reverse an opioid overdose. Protocols allowing EMS responder administration of naloxone via IM and IN routes will increase naloxone in our communities and result in lives saved. Agencies interested in training or education on the opioid crisis and on the administration of naloxone can access resources by contacting Utah Naloxone (UtahNaloxone@gmail.com). 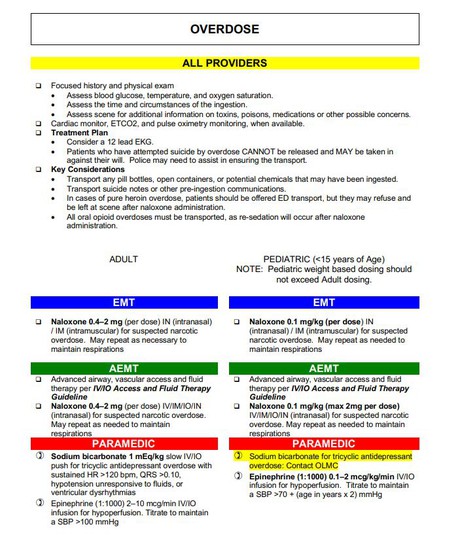 A Word From Our Program Manager

In the words of William Blake, “In seed time learn, in harvest teach, in winter enjoy.” I admit I enjoy the winter. I appreciate this time for rejuvenation and planning. I also appreciate the beauty of the snow blanketing our mountains, protecting and nourishing the resting seeds that will gingerly raise their heads in the spring. To me the snow is like the wrapping paper for Nature’s gifts that will be ripped open by the sun and rain in the spring, summer and the fall. I know . . . haters are going to hate, but I enjoy.

As you sit by the fire with a cup of your favorite hot beverage, I’d like to draw your attention to some reading material that may be of interest to you. I have referenced the Children’s Safety Network in our newsletters before and will continue to do so. They have some very interesting articles and information on topics relevant to your work. The current issue provides journal articles, information in the media, resources, and research on topics like opioids, suicide, bullying, prevention and TBI. Their website is https://www.childrenssafetynetwork.org/.

Whether you are enjoying winter’s embrace or anxiously waiting for spring, the staff of the EMSC program would like to thank you for your service and commitment in taking care of injured and ill children in Utah. Your efforts save lives and make a difference. You are appreciated. Please continue to contact us for prevention and education resources. Your suggestions for speakers, resources and materials are always welcome. And . . . Happy Valentine’s Day!

Pediatric lectures for EMS, face time with PCH Attending Physicians and subject experts, these lectures are monthly on the 1st Thursday from 3-4 p.m. You can attend live or watch the webinar. It will qualify for pediatric CME. Access at https://intermountainhealthcare.org/locations/primary-childrens-hospital/classes-events/petos/
Get Directions

This one-day conference is designed to increase the knowledge and expertise of emergency personnel involved in caring for injured patients.

Register online at peppsite.org. Look up classes in Utah and find the one that will work for you. Once you find the class, go to jblearning.com, and look up pepp als in the search tool. Purchase the number ($18.95). Return to peppsite.org to register for the class and follow the prompts.