Johnathan is using Smore newsletters to spread the word online.

Get email updates from Johnathan:

A representative from UNCP visited Scotland High School to discuss the RIBN Program with our students. RIBN is a statewide dual-degree educational track to obtain an ADN and BSN degree targetted toward graduating high school seniors and students who are beginning their collegiate careers. The curriculum blends the best of both an ADN program and a BSN program.

The first three years of study will be at one of the Partner Community Colleges in collaboration with UNC Pembroke (UNCP). Upon successful completion of the first three years and after passing the National Council Licensure Examination for Registered Nurses (NCLEX-RN), students will be eligible to practice and matriculate into the fourth year of the program at UNCP. The fourth year is offerred completely online so that students may immediately begin working as nurses following the third year.

Each year, NC Beautiful, the Capitol Broadcasting Company, and WRAL-TV partner to make thousands of azalea plants available to non-profit organizations who wish to beautify their grounds. The azaleas are propagated from the WRAL gardens, a project of the late A.J. Fletcher, a founder of WRAL.

The Scotland Agriculture Department was awarded 50 azaleas for beautification and pollination at Scotland High School. Students in the agriculture classes will plant and maintain the plants for beauty and as food for pollinators. Members from the Horticulture l class pictured L-R are Rahsheed Jackson, Adrian Ransom, River Cheek and Chandler Allred.

The Carver Middle School HOSA Club supported their football team at the big game versus Spring Hill Middle School. Students provided support to the athletic trainers to ensure athlete safety. This is the first year that Carver has sponsored a HOSA club and they are already very active. The club is under the leadership of Jennifer Lawson. 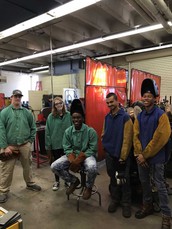 The competition was so stiff that each team only won by a mere 4 points difference. The students had fun, but most of all they are prepared to weld in the horizontal position with the stick welding process to industry standards. 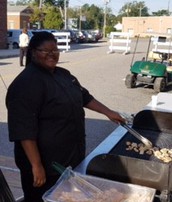 The Bagpiper Restaurant went on the road to serve their creations at the Storytelling Festival of the Carolinas. Students' culinary skills were on display as the hungry festival crowd stood in line to sample the food. This exposure will continue to attract customers to our very own Bagpiper Restaurant. Please come join us for breakfast or lunch, Tuesday through Thursday on the campus of Scotland High School. 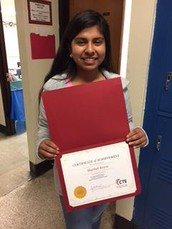 Maribel Reyes is a senior at Scotland High School. Maribel was selected for the U.S. Presidential CTE Scholar Award. She will represent Scotland County Schools in the state competition. Only twenty students from across the state were selected for this award. In addition, she is president of the HOSA club and a member of the cheerleading team.

Johnathan is using Smore newsletters to spread the word online.

Follow Johnathan McRae
Contact Johnathan McRae
Embed code is for website/blog and not email. To embed your newsletter in a Mass Notification System, click HERE to see how or reach out to support@smore.com