The Crusades as a Jew

The Crusades as a Jew

Jerusalem was our land originally but during the Crusades, Jerusalem was attacked because everyone wanted Jerusalem for some certain reason, It was our homeland, it was where Jesus was born and thats why the Christains wanted it, and the Muslims wanted it because they had a sacred temple. Many people attacking were heavily armed and didn't give much of a chance. I think we could have worked something else out rather than straight out attacking us. 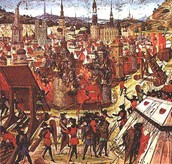