See it at a theater now!

See it at a theater now!

Why you should see this play

A Christmas Carol is a play based on Charles Dickens' classic novel, the play adds new aspects making it different, engaging, and a new experience. First of all, the play included new characters that weren't in the book, giving a rather new and interesting experience. For example, Merriweather the housekeeper was in the play and not in the book. She provided comic relief and was an interesting character to get to know. Another example of something interesting was that there were different intriguing light and steam effects. For instance, when The Ghost of Christmas Yet to Come came in, the lighting was focused on Scrooge, then the lights were focused on the whole stage but dim, as that happened steam shot up from the floor. My last is that the play has more comic relief. In the play they will make jokes or do something funny. One time Scrooge was happy and he made funny movements and danced. In conclusion, you should see the play because it adds different interesting qualities with amazing visual effects. 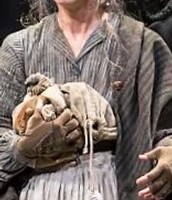 In this play a sacrifice Scrooge makes is that he gives his money to those in need. I've also made sacrifices. One time my sister had dance recital, and I didn't have to go. I decided to go even though I could've gone to my friend's house. It wasn't a big impressive sacrifice, but I made my sister happy and I got to see some good dancing.