By: Nicole Brown and Madison Patrick

By: Nicole Brown and Madison Patrick 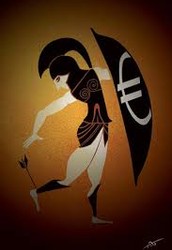 The Trojan War and Death of Achilles

The Trojan War took place in the City of Troy between 1194–1184 BC. This great war took place because Paris a man of Troy took Helen, the wife of Menelaus King of Sparta. Achilles was brought into this battle because of a former oath that he had agreed to years before that required Achilles to help his "Blood Brothers" anytime that they needed him to if it had anything to do with protecting Helen. During the battle after many deaths Achilles killed an man named Hector. Hector was a cousin to Paris, when Paris found out the news of Hector's death he was infuriated. So Paris shot Achilles in the foot, the only venerable place on his body and killed the great Hero Achilles.