enid is using Smore newsletters to spread the word online.

Get email updates from enid:

Practices of the Chinese Civil War

From 1927 to 1950 China became a part of an unfortunate, long, continuous war which is now known as the third largest war, Chinese Civil War. China was made up of three parties, communists, nationalists and warlords. Although communists and nationalists were a part of the same region and seemed as if they were supportive of one another, deep down the fake smiles was an endless strong rivalry. From 1927 to 1936 both parties attempted to eliminate one another to gain the absolute control of China, at the start of the war (1927) the nationalists party managed to kill and arrest many of the communist party leaders, this was known as the Shanghai Massacre. After the attack, Mao (communist leader) decided to create an uprising against the nationalist but failed. Mao still continued on with his attempts on eliminating nationalist leaders, but the nationalist army was always aware and prepared for whatever came their way. This became the usual and it went on for almost a decade up until 1936.

The war came to a pause once Japan invaded China and both parties united to fight the war together, today known as WWII. After WWII happened the Civil War continued and that's when everything went down hill. 1945-1950 were some of China's most difficult and hard times, because of the civil war between communists and nationalists, all of China suffered and was affected. China came to an economic crisis, many troops (both communists and nationalists) died, many Chinese citizens were displaced and there was an exceeded amount of six million deaths. Throughout the process, both parties tried to outdo each other and gain the support and control of the people of China. It seemed as the nationalist party was stronger but the communist party seemed to be more strategic and persuasive, so in the end the nationalist party eventually gave up and moved to Taiwan and gave total control of China to the communists party. According to Cold War for Kids: Chinese Civil War, the result of the war resulted in both parties went their separate ways and started the government, communist took control of China and created the"People's Republic of China." Because the communist took over most of China, nationalist moved to the small island of Taiwan and created the "Republic of China." Although the war did come to an end, it was never the end of this big rivalry between the communist and nationalist party.

According to Ken Nelson from The Cold War for Kids: Chinese Civil War, in 1934 the communist party decided to go on a series of marches all over China to retreat from Kuomintang (nationalists). These marches would last up to a year and they would travel 7,000 miles, from southern china to northern China. Originally, these marches would start with 80,000 communist soldiers but eventually ended with 8,000 soldiers by the time they reached their destination. 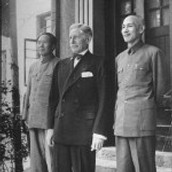 Communist leader, Mao, and Nationalist leader, Chiang Kai-Shek were the men behind all the chaos. Because of the leaders' actions, the problems that were supposed to be between two parties soon became all of China's problems. As Rebecca Cairns, from The Chinese Civil War, states that the Nationalist party created "dissatisfaction" with the Chinese government. Most of China's money was used for corruption related to the war, both parties caused China to go through economic struggles.

At the end of the Civil War, the amount of deaths was drastic, over six million troops/citizens altogether. The people of China didn't have much say in the war, they just had to pick a side and do as said. Many citizens were included into the six million deaths, many lost their homes and were displaced from their homes. Some died of hunger, others died simply for being a part of the war. It was a sad and very difficult time period for China.

What were some of the different ideologies and similarities of the two separate governments created?

enid is using Smore newsletters to spread the word online.