The American Dream and More

The American Dream and More 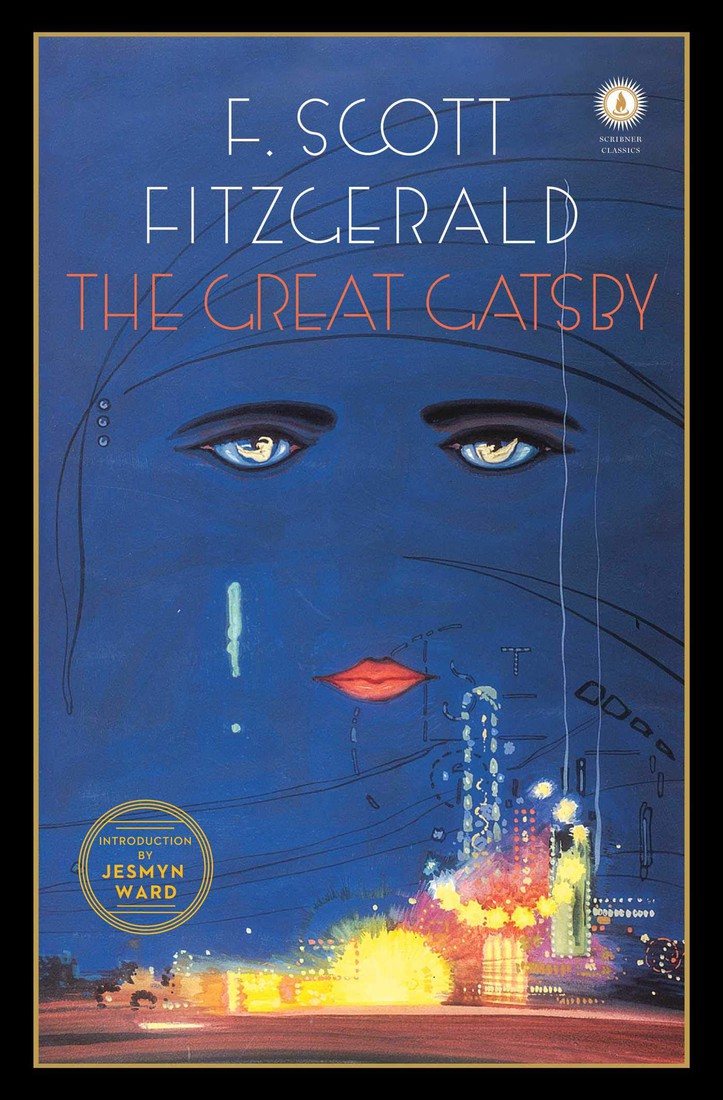 “I enjoyed looking at her. She was a slender, small breasted girl, with an erect carriage, which she accentuated by throwing her body backward at the shoulders like a young cadet” [Fitzgerald, 9] In the Great Gatsby the novel explores the norms of sexuality, It goes against the regular that we hear and see in society. The author explores Queer Theory throughout the novel through the narrator, Nick Carraway who’s descriptions of other characters questions his own individual sexuality's. His description of males is vivid and holds sexual attraction. While describing women Nick’s descriptions are straight to the point and short. The author foreshadows Nick’s homosexuality throughout the novel by events that mainly happens in chapter 2 of the book. His connections with character helps readers explore this theory in the novel and explore the terms of masculinity and femininity.

There have been many characters hat have a sexual impact on Nick’s opinion of his own sexuality. Some characters have helped develop clarity as to what gender Nick is into. In chapter 2 of The Great Gatsby the events that took place after one of their parties plays an important role in developing the opinions about Nick’s sexuality. During the party Nick meets the photographer Mr. Mckee. The unique description of this character was not out of the ordinary for Nick, he states “Mr. McKee was a pale, feminine man from the flat below. He had just shaved, for there was a white spot of lather on his cheekbone, and he was most respectful in his greeting to everyone in the room.” (Fitzgerald 25 ) Giving Mr. Mckee a feminine description for a masculine man. The odd part about this is the description Nick gave for the wife which was “His wife was shrill, languid, handsome, and horrible.” (Fitzgerald 25) Nick addresses the women in the novel in a more masculine tone.

The complexity of gender roles in the Great Gatsby is noticed throughout the reading . The author explores homo and heterosexuality throughout this novel. Nick supported this claim as well with descriptions of Tom for example helped this case. In chapter one of The Great Gatsby Nick describes Tom as “He was a sturdy straw-haired man of thirty with a rather hard mouth and a supercilious manner. Two shining arrogant eyes had established dominance over his face and gave him the appearance of always leaning aggressively forward. Not even the effeminate swank of his riding clothes could hide the enormous power of that body — you could see a great pack of muscle shifting when his shoulder moved under his thin coat.” (Fitzgerald 8) This was one of the many examples to help readers understand the gender roles in the novel and the sexuality of Nick.

In other words, the author depicts human sexuality as more complex than the gender terms male and female through the character Nick. Nick is not said to be homo or hetero male in other words which gives readers the chance to foreshadow and analyze the text. Nick does not treat other males or females the way the norm of society is used to. 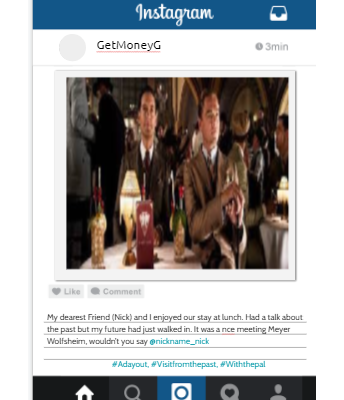 Gatsby and Nick goes out for dinner and meets the lovely Myer. The caption says "

My dearest Friend (Nick) and I enjoyed our stay at lunch. Had a talk about the past but my future had just walked in. It was a nice meeting Meyer Wolfsheim, wouldn’t you say @nickname_nick #Adayout, #Visitfromthepast, #Withthepal 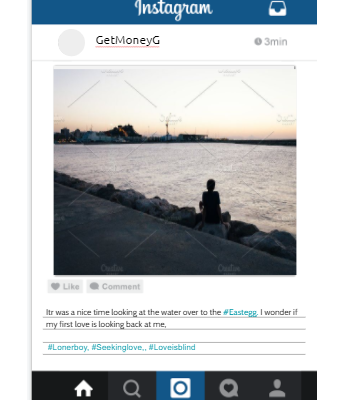 It was a nice time looking at the water over to the #Eastegg. I wonder if my first love is looking back at me, 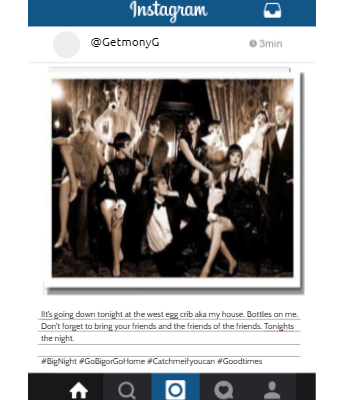 IIt’s going down tonight at the west egg crib aka my house. Bottles on me. Don’t forget to bring your friends and the friends of the friends. Tonights the night. 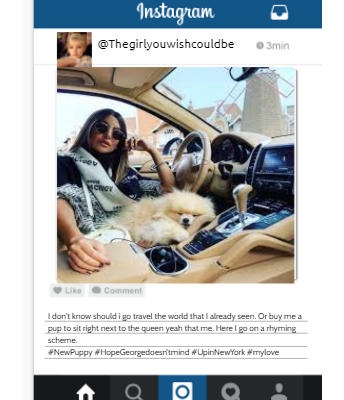 This post is describing Daisy lifestyle. For example her @ name is @thegirlyouwishyoucouldbe. Now the name was is pretty long but she the type of female in the novel who did it all and have it all. 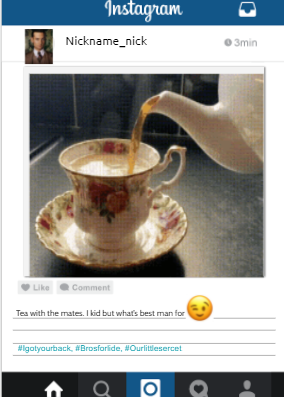 This post is based on Gatsby and Daisy's "sneaky" link when Gatsby had Nick host a mini tea party. 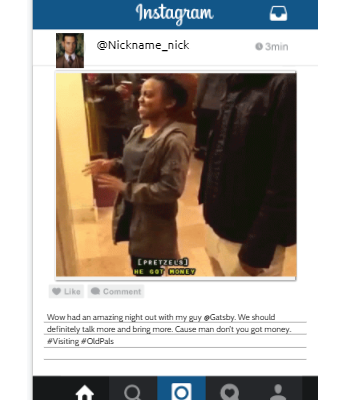 The events after Gatsby party is based on this post. His parties had people speaking money.

Life: The Game Of Colored in America 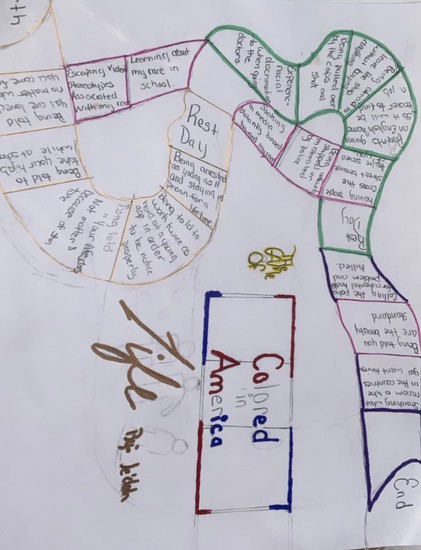 What are the limits of American opportunity?
To answer the following question above I created a picture of a board game that represents the limitations that colored Americans have to face in trying to succeed the idea of the "American Dream". I was inspired by the original game called Life and created my own twist to it. Depending on the race of skin will determine the outcome of your journey. Some examples that can happen while playing this unqiue game is Being told to work twice as hard at a young age in order to be notice properly or Having to do research before traveling to see how racism is in other countries. There some privileges to my drawing of the game which is Escaping violent stereotypes associated with their race or being told you are the beauty standard.

Now the scenarios that are listed are not possible all the outcomes of the limits for Americans. Some have different circumstances where the law plays a role or passive income might effect that outcome for how successful someone can be in the American aspect.