Joel is using Smore newsletters to spread the word online.

Get email updates from Joel:

Peter and the Starcatchers

Peter and the Starcatchers

Black Stache. The bane of all seamen. The lord of pirates... enough chatter, get on with the flyer! 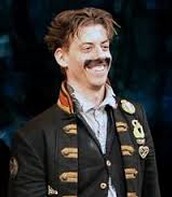 Facebook @therealblackstache
The lord of pirates, as I said earlier, but fortunately for his victims, he is sometimes a little nutty! His mission is to capture the Wasp, and he doesn't what anything but that. His ship is the Sea Devil, and its secret weapon is its special sails, the "ladies".
Caribbean Sea meanguy@pirate.com 919-473-1090 seadevilstache.org

1.Mean (duh!)Black Stache is so mean that on page 131, he agrees with smee about leaving people to die of thirst humanitarian! ("I think it's a grand humanitarian effort.")

2.Clever:On page 113, He cuts away the burning ladies, but he attaches a mooring buoy to keep them from sinking into the ocean. ("Cut loose the ladies," Stache ordered smee.)

("...Preparing to toss them overboard for no good reason.)

3.Greasy hair:On page 33, the text says his hair is long and greasy. ("His long black hair, greasy from years without washing...")

4.Black eyes: On page 33, the text says he has piercing black eyes. ("He had dark, deepest, piercingly black eyes...")

Join Black Stache for a afternoon of fun! Try the rigging obstacle course, and try to dodge cannon balls during the battle of the wasp! You can even fire a cannon for the small price of joining the crew permanently!
Get Directions

Joel is using Smore newsletters to spread the word online.