Our carbon footprint is getting bigger and bigger every year. The food industry today is a big part of climate change around the world. There are several factors that contribute to food's climate impact. Greenhouse gas emissions can increase or decrease depending on; how far the food has to be transported, what methods are used to grow it (organic vs pesticides), and how much energy it takes to produce the food. The average meal takes around 1200 km from the farm to your plate (Food and climate change, 2014). The longer the distance that food has to travel, the more carbon dioxide is emitted, which further increases the anthropogenic greenhouse effect. Synthetic pesticides are widely used by farmers to keep their crops safe. Producing these chemicals often takes burning fossil fuels. Manufacturing and transporting of pesticides use significant amounts of energy and add more pollution into the environment. When the pesticides finally get to the farmer and are used, they release even more gases into the air. The use of popular synthetic nitrogen fertilizers in soils release nitrous oxide which is 300 times more powerful than carbon dioxide at trapping heat in the atmosphere (Food and climate change, 2014) . Organic farmers use all natural fertilizers like manure and compost to help grow their crops, this helps in storing much more carbon dioxide in the soil and doesn't emit copious amounts of gases in the process. Livestock production accounts for 70% of all agricultural land food, and 30% of the land surface on the planet (Food and climate change, 2014). Unfortunately, meat is also a big producer of nitrous oxide and methane. It is estimated by the Food and Agriculture Organization (FAO) that meat production is responsible for 18% of all greenhouse gases (Food and climate change, 2014). On top of all this, livestock (especially beef) is very inefficient to produce. Each farm animal takes great amounts of water, grain, and energy to produce. It takes 5-7 kilograms of grain and 15 cubic metres of water to produce just a single kilogram of beef. Now imagine these numbers on the amount of animals that can fit on 30% of the total land on Earth, it really does add up.

If greenhouse gases keep being emitted in the amounts that they are, and climate change keeps making the planet warmer, there could be some very serious impacts on food. First of all, crops will take a very big hit. At first, it may seem that warmer climates may be better for growing crops faster. the thing about this is that in some areas of the world they will grow faster, but since they're growing so fast they don't have enough time to mature and will have a lot less nutrients (Agriculture and Food..., 2013). As stated before, some regions may benefit from the warmer climate, but other regions will experience major drought, which will virtually eliminate any chances of growing anything. Another thing is that weeds, pests, fungi, and other crop harming organisms prosper in warmer climates (Agriculture and Food..., 2013). This will force farmers to use more harmful pesticides, or have their crops destroyed. As well as crops, there will also be an effect on animals. Heat waves can become so severe that they kill livestock from heat stroke and dehydration. Some States in the US have reported that one single heat wave has killed more than 5000 animals (Agriculture and Food..., 2013). It also makes them more vulnerable to disease and less fertile. Tying in to crops, animals will have decreased sources of food in some areas because of drought and shortage of food, as well as more need for water. Fisheries already face water pollution and climate change won't make things much better. Fish require colder water temperatures to survive and reproduce. Migrating to colder waters can cause imbalances in the ecosystem because of competition for food (Agriculture and Food..., 2013). We are only furthering global warming in the way we prepare food, and if people make no attempt at change there could be a global food crisis that could have the possibility to cripple entire nations.
How to feed the world in 2050: actions in a changing climate

The Focus of our Study

The purpose of this study was to see if there was a correlation between gender and different food choices and actions that impact climate change. There are many things that people do in their lives that impact climate change, food is a great example of that. Certain areas of this topic were targeted in our survey that play a big part in the food industry's carbon footprint.

We collected information at Erindale Secondary School by asking 30 total participants to complete a short survey of 5 questions pertaining to food and climate change in their daily lives. The participants were asked to circle whether they were male or female so there was an equal selection from both genders. The data was then grouped and analyzed to see if there was any correlations between the gender of the person and the questions that were asked.

Results of our Study 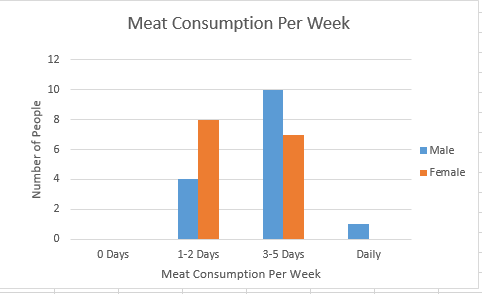 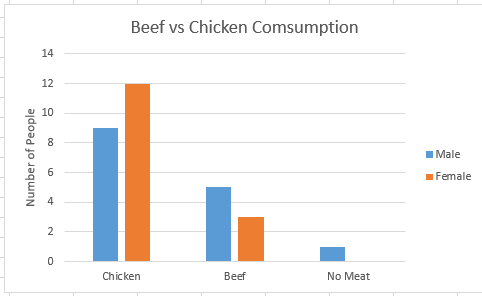 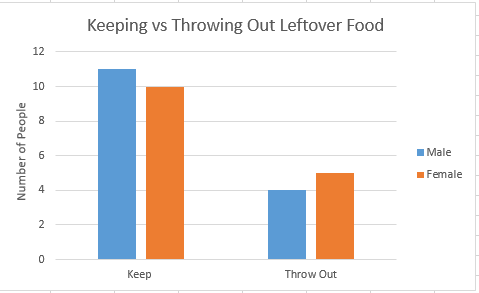 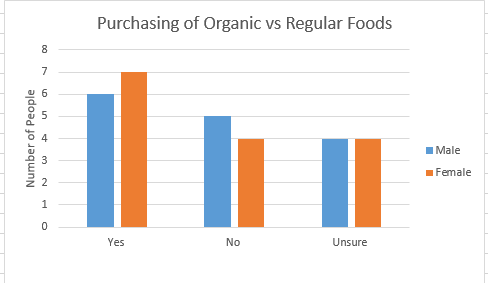 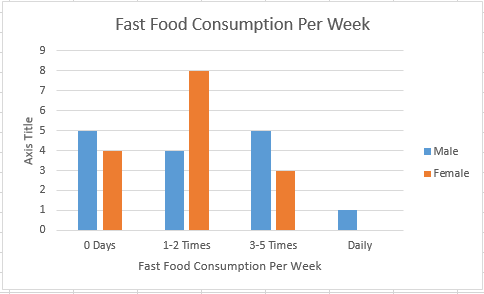 How much meat do you consume a week?

The data from this question shows that there is a correlation between gender and the amount of meat an individual consumes. On average, boys eat more meat than girls throughout the week. Most males were in the 3-5 range with one even saying daily, while girls mostly were in the 1-2 range. The reason for this could be because boys need more food then girls. Males are bigger so they need more protein and calories, meat is a great source of proteins, vitamins, and other nutrients.

Do you eat more beef or chicken?

There is a slight correlation as boys eat more beef than girls, the separation is very slim though. There is around a 2 person difference between meats. The females had a 12 person gap in the results for chicken, while males only had a 4 person difference. Overall, people are eating more chicken over beef. In both genders chicken was the more popular choice. Chicken is the more popular choice because people have the knowledge that chicken is better for you, and beef isn't recommended to be eaten more than once a week

Do you keep or throw out leftover food?

This part of the survey didn't have a correlation, both sides were basically even as most people keep their leftovers. This could be because most people aren't very wasteful and it also saves money to keep leftover food instead of buying new food.

Do you purchase organic or regular food?

There was no correlation between gender in this question. Yes was the most common answer but it was almost even through all 3 choices. This could be because most people like to buy foods that are said to be healthy. There was a number of people that were unsure as well because some students usually don't pay close attention to what produce their parents buy.

How much fast food do you eat per week?

There was a slight correlation in this area in that boys eat more fast food then girls. Most girls ate fast food around 1-2 times a week while the boys answers were spread out. Overall, the results said that boys eat more, this could be because boys are more inclined to eat fast food than girls. Fast food is marketed more towards males, also more females know how to cook and prepare their own food than males.

Some things our group could have done to improve the study was to survey a greater sample size of people to get more definitive results. We also could have created questions that pertained more to the individual. For example, instead of asking about whether they purchased organic or regular food, we could have asked if they pay attention to what kind of food they eat.

Our group decided to raise awareness about the very serious issue of climate change. We did this by creating a twitter account devoted to sharing knowledge about climate change. The Group Against Climate Change (TGACC) also retweets other facts from worldwide sources in an attempt to make our message known that climate change is a big problem in the modern world.
TGACC

Actions You Can Take

Some actions that people can take in their daily lives to help decrease climate change are always beneficial no matter how small it is. Here are some actions relating to food that truly make a difference: