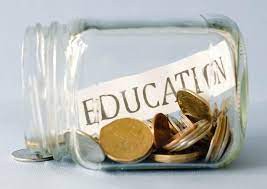 With our non-homestead millage renewal on the August 2nd ballot, I thought it would be a good idea to give you a brief overview of how schools are funded.

The funding for schools comes primarily from three revenue sources: local, state, and federal. Local and State are the largest, accounting for approximately eight-nine percent of our school district’s total revenue. We also receive a very small percentage of our budget through grants, donations, and other sources.

In Michigan, that eighty-nince percent of local and state revenue is distributed using a formula and looks different for each school district, based on the local tax revenue. Each year the State passes a K-12 budget and this includes per pupil foundation allowance and various “categoricals”. These categoricals are other elements of the State budget that are allocated for special purposes. For example, AGS receives categorical money for being small and rural, for our at-risk population, and for special education. There tends to be a lot of talk this time of year about the "per pupil" money that is apportioned by the K-12 budget. But how we actually get that money is interesting.

The State determines the per pupil amount each year, but the State requires each district to collect as much through local tax revenue as possible. Then the State makes up the difference. This is where NON-HOMESTEAD MILLAGES come in. The stipulations of State Aid Act (1994's Proposal A) are that local districts will levy 18 mills ($18 for every $1000 of taxable value) on non-primary residences within their districts to collect as much of that per pupil money as possible. If these 18 non-homestead mills are levied by a school district, the State will make up the difference between what was collected and what should be allocated based on the school district’s student enrollment.

At this point, I may have lost you, so let's look at some numbers. I'll use some fictional numbers for an easier explanation of just the per pupil value (not the categoricals).

The trick, however, is that we must locally levy the full 18 mills. If we don't, the State will not make us whole.

What this all means is that the millage renewal election that we have on August 2nd is extremely important to the funding of our school district. That’s why Michigan law allows all registered voters in the Au Gres-Sims School District to vote in this election. This is a renewal of what we have been doing. It will not increase taxes on primary residences (the home in which you live). But it will allow us to educate our students to the best of our ability.

Thanks for reading and for voting on August 2nd. Have a great weekend. 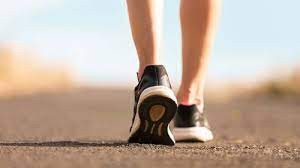 Are you having a hard time fitting exercise into your schedule? Start your day out with a morning walk. Morning walks have many benefits. 1) It can help improve your mood by reducing stress and make it easier to manage your day. 2) It increases your productivity by energizing you while also improving your concentration. 3) It can physically help your posture by increasing core muscles to support your spine. 4) It can help you manage your weight by jump starting your metabolism. 5) It can help you sleep better at night. 6) It can reduce your risk for diabetes, heart disease, hypertension (high blood pressure), obesity, and some cancers. 7) It can strengthen your bones and reduce your risk for osteoporosis. 8) It can help boost stamina, flexibility, and energy.

This upcoming Wednesday we have a couple important events. First, we have a 1:00 pm early dismissal for teacher professional development. That evening will be followed up with our annual Spring Band Concert starting at 7:00 pm in the main gym. We hope to see you there and support the efforts of our many band students.

Thank you to Deputy Rachel Vallad, the Arenac County Sheriff’s Department and everyone who donated to the Pinwheels for Prevention Program. In Arenac County we raised $2,599! Funds raised will be used for child abuse and neglect prevention throughout Arenac County. The class that raised the most at Au Gres-Sims was Mrs. Heck’s class! Nice job, everyone!

Next Sunday, May 22, our baseball and softball teams have a great opportunity and will be playing at Saginaw Valley State University! Game time is 3 pm and you must purchase a ticket ahead of time. Tickets are $5 and will be sold at next Monday’s home BB/SB games. If you can’t purchase them on Monday, please contact Athletic Director, Gordon Ostrander, at 989-254-9303, for ticket sales. 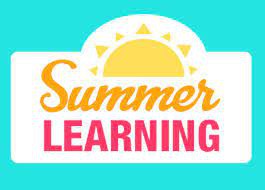 From the Desk of Mrs. Socha

As I mentioned last week, we are looking ahead to summer break which is just around the corner. We will have several different summer options to extend learning this year. First, we will have a Summer Enrichment Program for grades K-5 and 6-8, which is similar to what we did last year. This 6-week long virtual program will focus on reading and math skills that have been identified as areas of focus based on our Spring NWEA results. There is an online platform that the students will be working in, as well as weekly sessions with a staff member for small group or individual help. The program will run from June 27-August 5. This program is open to all students who are not already part of the Title I Summer Program with Mrs. Gordon. If you were invited to Mrs. Gordon’s program (K-5 only), you should have received your invitation earlier this week. A flyer with sign-up information will be released next week for the K-5 and 6-8 options. The High School Credit Recovery Program will also be available to high school students who need to make up credit. As we wrap up the semester, we will be able to finalize the high school list of students for Credit Recovery. Letters will then be sent out to invite students to take part in this important program. This will allow students who have failed a semester in a class to get back on track. Like last summer, we will refund the $50 course fee if your student successfully passes the course and earns back their credit. The program also runs for 6 weeks - June 27-August 5, and now that we are using Edmentum teachers for all courses, there is no in-person attendance requirement.

Finally, shifting gears to our current day-to-day focus - NWEA testing is wrapping up this week in the Middle and High School, and next week I will begin focusing on make-up testing. I will also have virtual students in for testing almost every day next week. Lower Elementary has pretty much wrapped up completely, and due to scheduling shifts in M-STEP, 3rd-5th grade will be working on completing their NWEA testing next week and fully wrapping up the following week. It is a tight schedule, but we are right on track to wrap up the end of this school year!

The Michigan Department of Health and Human Services (MDHHS) has a vast repository of Mental Health Resources including:

Check them out at: https://www.michigan.gov/coronavirus/resources/mental-health-resources 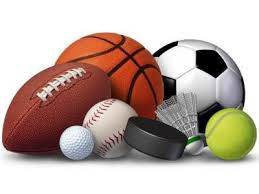 Next Week's Schedule of Events: 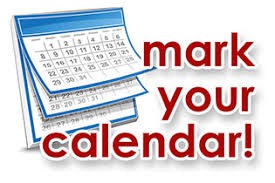 Important dates for May/June for the Au Gres-Sims School District.

Good News! We received confirmation this week that our waiver for 3 days was accepted by the state. We are confirmed for only 1 make-up day, meaning our last day of school is Friday, June 10th for students. 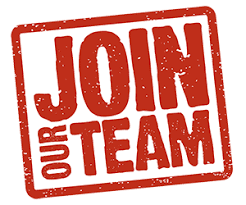 We are looking to add several community-minded members to our amazing team. If you or anyone you know might be interested in joining the Au Gres-Sims staff, please check out the employment opportunities section of our website.

We are also always on the lookout for substitute teachers. If interested, please inquire with Mrs. Miller in the district administration office, (989) 876-7157.

We are already planning ahead for next school year and looking for the very best to fill our ranks and join the AGS Family. We need your help! Please spread the word that we are on the lookout for the following positions for the 22-23 School Year. 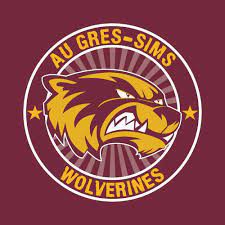 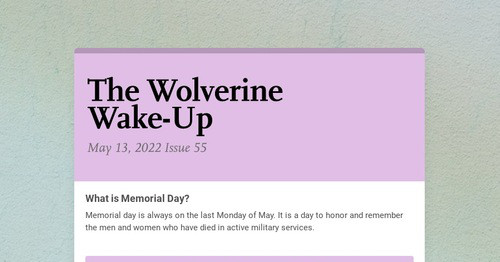 www.smore.com
The Wolverine Wake-Up - May 13, 2022 Issue 55 by Luke Freeman | This newsletter was created with Smore, an online tool for creating beautiful newsletters for individual educators, schools and districts 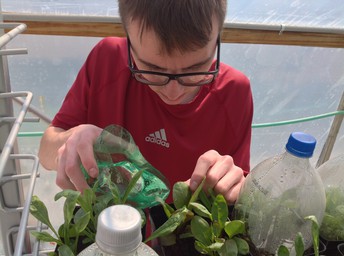 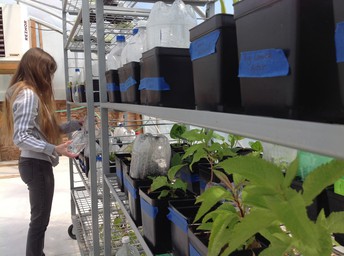 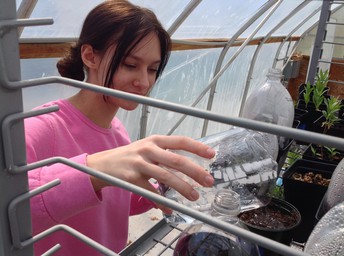 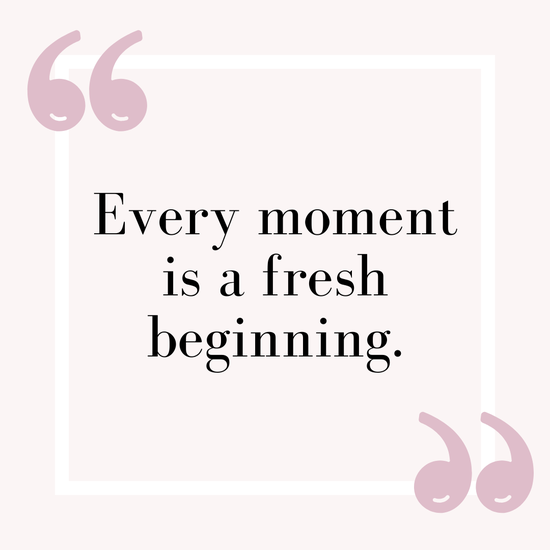 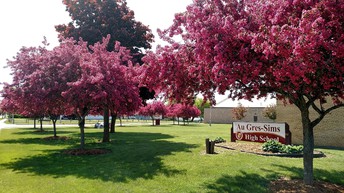 Follow Christopher Ming
Contact Christopher Ming
Embed code is for website/blog and not email. To embed your newsletter in a Mass Notification System, click HERE to see how or reach out to support@smore.com
close