Jan is using Smore newsletters to spread the word online.

Westward Expansion and Its Impact on Slavery

Near the beginning of the 1800's, the United States acquired new lands

West of the Mississippi River. Explorers like Daniel Boone, Lewis and Clark, and Zebulon Pike paved the way for pioneers to move westward. This expansion caused harm to Native Americans, and impacted the institution of slavery. 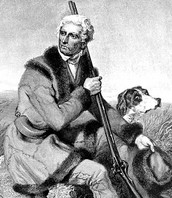 Daniel Boone crossed the Appalachian Mountains, through the Cumberland Gap to Kentucky creating the Wilderness Trail which later became the first national road.

With the help of Native American guides, Lewis and Clark explored the land included in the Louisiana Purchase. President Thomas Jefferson commissioned them to investigate the land and write down their findings. Lewis and Clark provided scientific information and examples of the plants and animals they found. 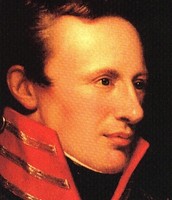 Zebulon Pike located, explored and mapped land near the upper portion of the Mississippi River. His exploration included uncharted territory near Oregon Country and south into Spanish territory. Pike's Peak, in present day Colorado, is named in his honor.

www.watchknowlearn.org
An educational video for kids. This educational cartoon about Daniel Boone, is part of a series and is hosted by an animated mouse-historian The video used still pictures and limited animation to tell stories about people and events from the last 2000 years. Syndicated in 1969. A Krantz Animation/Quality Entertainment/ARP Production. Produced by Steve Krantz. Directed by Shamus Culhane. Narrated by Bernard Cowan. Voice of Max: Paul Soles. 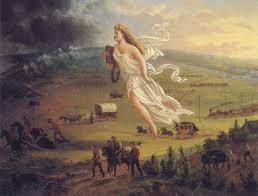 Americans began to justify their westward expansion with the idea of Manifest Destiny, a God given right to expand and claim lands from coast to coast, or from the Atlantic Ocean to the Pacific Ocean.

This painting ( 1872) by John Gast called American Progress. Here Columbia, a personification of the United States, leads westward with American settlers. She holds a school book as well. The different stages of pioneer travelers are seen, as well as the changing forms of transportation. 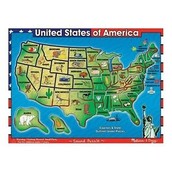 The Indian Removal Act of 1830 was a law passed by the United States Congress and signed by President Andrew Jackson. It provided land and money the president could use to make treaties with Native Americans. Native Americans were asked to move west, but if they resisted, the government would take their lands by force. The Cherokee Nation attempted to live in harmony with the American settlers and adopted their American customs. They tried to resist removal by taking their case to the Supreme Court. Although the court ruled that the Cherokee had a right to their land, President Andrew Jackson ignored the court. He used the army to force the Cherokee to move from their homes across the Mississippi River to Oklahoma, the Indian territory, on what is called the Trail of Tears. 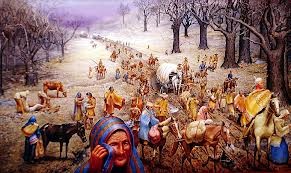 www.brainpop.com
In this BrainPOP movie, Tim and Moby reveal one of the saddest episodes in U.S. history. Learn how white settlers’ desire for new land threatened American Indians, entire tribes of whom were forced from their ancestral homelands to newly designated Indian Territory. Terrible suffering was endured by the Choctaw and the Cherokee as they marched westward. Discover what lessons we can learn from this tragic era in American history.

Jan is using Smore newsletters to spread the word online.