Alexander Graham Bell was born in Edinburgh Scotland March 3rd 1847 he was a famous for inventing the telephone.

On February 14 1876 Bell and anAmerican electrical engineer named Elisha Gray had been working on inventing the telephone.

Bells first words on a working telephone were spoken to his assistant Mr Watson then along the lines of Mr Watson come here I want to see you. Bell improved on the design and by 1886 more then 150000 people owned the telephone in united states.

Alexander Graham Bell became famous and today most people have a telephone. 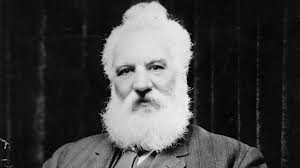