Red is using Smore newsletters to spread the word online.

Get email updates from Red:

They are continuous directed movement of sea water generated by the force acted upon this, such as breaking waves, wind, Coriolis effect, cabbeling, etc.

Shows where the water is directed. 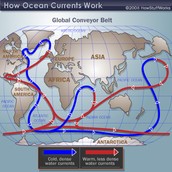 Shows where the currents change from hot to cold.

Shows the average temperature of the water in general.

How do the currents affect climate?

Ocean currents travel great distances. they flow like a global conveyor belt, and circulates water. Due to the circulating water, the temperatures often change from hot to cold and back again. When the water temperature changes, it changes the temperature of the land mass near it. An example of this is northwest Europe, which is much more temperate than other regions of the same latitude. it often stops ice from forming on the shores.

In the northern hemisphere turn clockwise and the opposite for the southern. This is caused by imposed wind stress. deep ocean currents flow under the surface of the ocean and are hidden from immediate detection. the deepness changes and are called upwellings and downwellings. The density of the water change the temperature and the salinity.

The Coriolis Effect is an effect whereby a mass moving in a rotating system experiences a force (the Coriolis force ) acting perpendicular to the direction of motion and to the axis of rotation.

Red is using Smore newsletters to spread the word online.