Get email updates from Abraham:

Roman Polanski version was actually pretty close to the actual play they portrayed the witches well and made them look how I imagined they looked while reading the play. Geoffry Wright's version was made more modernly and they used young ladies as witches the witches looked clean, neat, and pretty which is something we wouldn't expect. I liked the 1971 Roman version better because it was more understandable the other witches from the 2006 version were young and had book bags so it didn't really make sense. 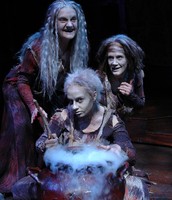 A difference I noticed while watching both versions of Macbeth was the age differential between the 1971 witches and 2006 witches.

One similarity I noticed between both versions was the witches all wore dark colors and had an evil look to them.