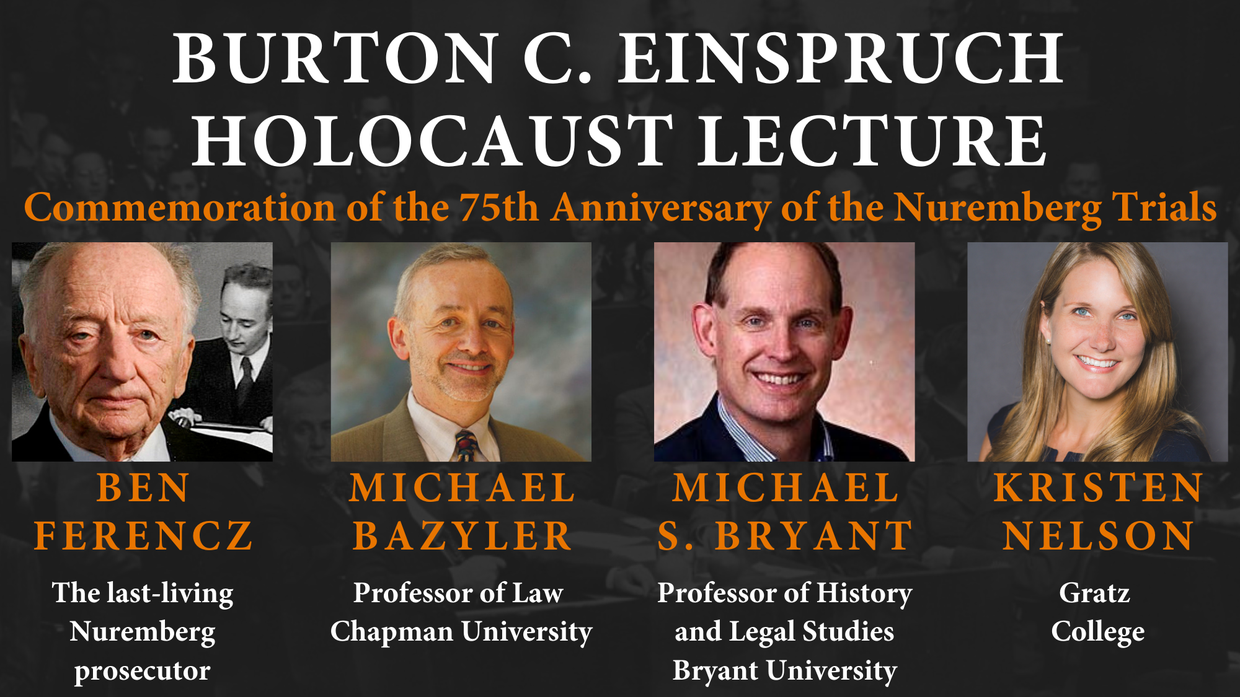 Commemoration of the 75th Anniversary of the Nuremberg Trials

This year's Burton C. Einspruch Holocaust Lecture Series, “Commemoration of the 75th Anniversary of the Nuremberg Trials,” featured topics related to the enduring legacies of the Nuremberg Trials with a contemporary focus. The series was presented in two parts: Part I was a pre-recorded interview with Benjamin Ferencz, the chief prosecutor for the United States Army at the Einsatzgruppen Trial in Nuremberg. Part II was a live panel presentation with Michael Bazyler (Professor of Law and The 1939 Society Scholar in Holocaust and Human Rights Studies, Dale E. Fowler School of Law at Chapman University), Michael S. Bryant (Professor of History and Legal Studies, Bryant University), and Kristen Nelson (Assistant Managing Editor – European Court of Human Rights Module for Oxford Reports on International Law, and Adjunct Professor at Gratz College). 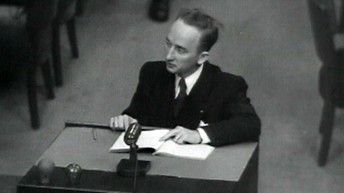 Ferencz recalled his experiences as the U.S. Prosecutor at the Einsatzgruppen Trial in Nuremberg, Germany, where he brought charges against 24 of the highest-ranking officers of the Einsatzgruppen, the mobile killing squads of specialized German police battalions responsible for the murder of over 1 million Jews in Eastern Europe, who shot men, women, and children into mass graves.

Ferencz described his shock when he discovered the meticulous documentation kept by the Einsatzgruppen kommandos that chronicled their daily activities, including participant names, locations of actions, and numbers of Jews killed. Outraged at the atrocities he had found, he immediately gathered as much evidence as he could and took it to General Telford Taylor, who initially told him that they did not have the resources to hold any additional trials than the 12 that had been authorized. Ferencz persisted in his determination to bring the Einsatzgruppen to trial and was given permission by General Taylor to indict 24 of the highest-ranking Einsatzgruppen officers involved in the actions in the East. Though there were over 3,000 members of the killing squads, only 24 defendants were allowed to be selected because that was the number of seats they had in the dock.

The trial began on September 29, 1947, and concluded on April 10, 1948. All 24 men were found guilty, but Ferencz stressed that the sentencing of such a small number of individuals responsible for such heinous crimes could not make an impact in any meaningful way for the future, and with this in mind, he asked the panel presiding over the proceedings to set a jurisdictional precedent for the future prosecution of such crimes. Ferencz’s “Plea of Humanity to Law,” the speech he made before the court, marks a watershed moment in both the history of the Holocaust as well as in law studies and has implications that are still relevant today.

The recording of this interview can be viewed by clicking here.

Law professor Michael Bazyler, during his lecture, “Testimony and Evidence Presented on the Holocaust,” explained how, despite direct documentary evidence referring specifically to the targeted and systematic extermination of the Jews, prosecutors were able to establish the guilt of the defendants during the war crimes trials conducted after WWII.

Professor Bayzler also highlighted the type of “double-talk” that characterized the testimony of Nazi defendants, explaining that the defendants would often vehemently deny any acknowledgment of extermination as official policy towards the Jews, while contradicting themselves under cross-examination.

Professor Michael S. Bryant discussed the history of the International Military Tribunal at Nuremberg (IMT), which was responsible for the persecution of major war criminals after WWII. The roots of the IMT, he explained, can be traced to the spring and summer of 1942, when the first reports of the final solution made their way to the Western allies. The awareness of the Nazi atrocities provoked a series of warnings threatening repercussions for those responsible for them.

Delegates from each of the Allied Powers, including the United States, Britain, and Russia, convened to address the post-war prosecution of high-ranking Nazi party members involved in all spheres of activity; military, bureaucratic, and others. He discussed the debate between the prosecutorial heads about how to classify the crimes with which they were being charged. The result was a four-category system that concentrated on the types of crimes of which the individual was accused and depended on their level of involvement, and in which locations their crimes were committed. Professor Bryant did emphasize the fact that crimes against humanity did not include genocide. The reason for this, he explained, was that at the time it was thought that the term genocide was altogether too new, and with no prior precedent, it would be difficult to employ in a jurisdictional manner. It is for this reason that the charge of genocide was referred to as crimes against humanity.

During the trial, Bryant explained, the defendants were prohibited from retreating to a “superior orders” defense, which means that they could not escape their individual accountability with the defense that they were merely “following orders.” The Nuremberg Trials represented the first International Tribunal formed by blending both Anglo American and European law traditions in the manner of addressing prosecutorial conduct.

Kristen Nelson presented the lecture, “Nuremberg Shaped our Modern Understanding of Justice,” in which she explained how the Nuremberg Trials have influenced jurisdictional issues since the end of the Second World War. Nelson called attention to the generation of scholars that emerged from the 80s and 90s, for whom the history of the post-war proceedings has influenced contemporary prosecutions of war crimes. Stressing the importance of the precedents that were set by these trailblazing legislative agents is still being used today, she provided examples of how the events that took place in Nuremberg informed criminal court tribunals for the prosecution of war crimes in Rwanda and Bosnia/Herzegovina.

The recording of this live panel discussion can be viewed by clicking here.

Save the Date - Remembering Kristallnacht

Please join our faculty and students as they look back on Kristallnacht.

Register in advance for this meeting by clicking here. 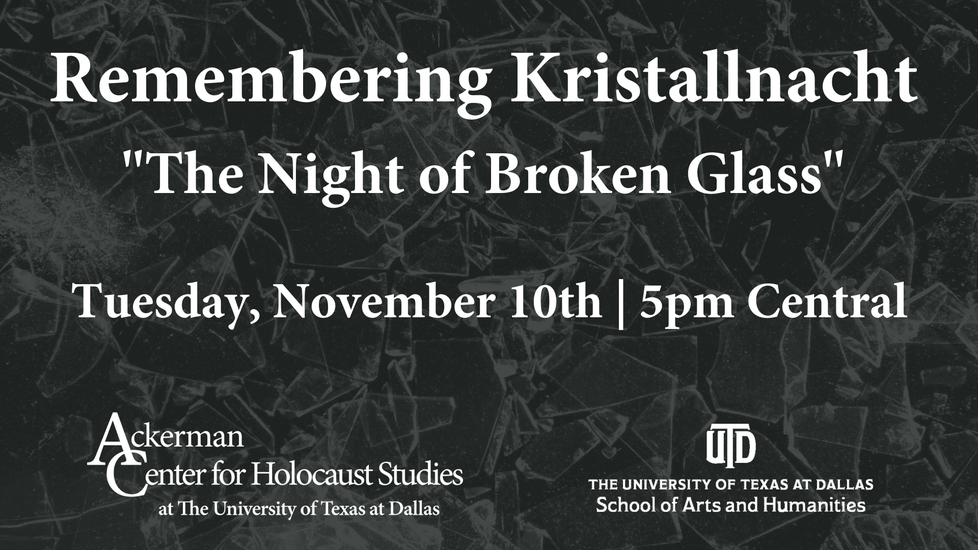 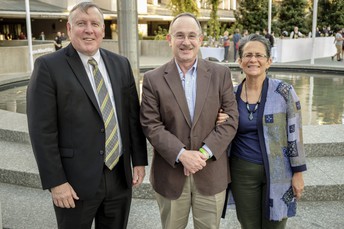 The Texas Jewish Post published an article this week about the newest member of our faculty, Dr. Amy Kerner, who is the Fellow of the Jacqueline and Michael Wald Professorship in Holocaust Studies. Click here to read this article.