Renee is using Smore newsletters to spread the word online.

Get email updates from Renee:

His comrades swore they’d fight till the end,

Would not give up or leave him behind,

Said their great lord was brave and kind

Prepared to fight the dragon with fiery breath,

This would be a final battle due to age,

Beowulf cried out that he would conquer or end in death,

Little did he know that the dragon was filled with rage

Once the dragon’s breath lept at his skin,

His once brave soldiers all ran off,

Too concerned about their next of kin,

One remained and blew a scoff

“Will we be loyal to our lord as we said?

Or disgrace his name when the dragon roared?”

Wiglaf claimed he would rather be dead,

Than to lose his loyalty to his lord 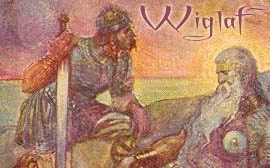 I chose to write a ballad about Beowulf around the topic of loyalty. The story was filled with loyalty from different aspects; however, for this ballad, I chose to write about the faithfulness from soldiers to their leader. Of course the soldiers respected Beowulf when he was mighty and one conquer his enemies, but the true test comes when he is at his weakest. When the dragon attacked, only Wiglaf remained faithful to Beowulf. Therefore, the theme of this poem reflects Wiglaf’s personality. He is a true soldier with undying loyalty to his leader.

I ask of you, in consideration to my dangerous mission, to remember my loyalty. If I am to die from the wrath of Grendel’s venomous mother, then send the precious gifts to Higlac, for he is a great lord. All of my victories are done in his name and for all the great Geats. Console my brave soldiers; they have served me well and deserve reward. I shall fall to no monster, but if fate claims this is the day I shall, then, great prince, I ask of you only those kind considerations.

I am loyal to the Geats, my lord Higlac, and my fellow soldiers, but the Danes shall always be in my heart. The opportunity to rid your land and save your people from the dark Grendel has been an honor. I am loyal to this mission of again saving the Danes from the monster’s mother, and I am prepared to fight with every ounce of strength in my body. This she-wolf will not be alive in the morning if I have anything to say about it. My faith in my sword and my faith in the lord shall lead me to a victory, I am sure.

When the time comes Hrothgar, know my loyalty and be prepared to send my graces to Higlac, my soldiers, the Geats, and the Danes.

Beowulf and his fellow Geats 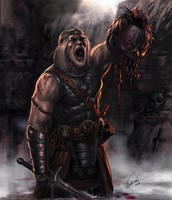 Beowulf and the Danes

For this letter, I chose to write about Beowulf’s loyalty towards Higlac, his comrades, all of the Geats, and all of the Danes. He is loyal to many parties and works hard to make them proud. He was even willing to die for them in battle. Therefore, the loyalty a man has will carry throughout his death.

In my video I portrayed the theme of “what goes around comes around,” or in other words, karma. My friend and I were recreating the final scene of the Pardoner’s Tale, and each acted out the part of a rioter. Both rioters were greedy and were planning to kill the other, despite acting friendly. In the end, by being greedy and stabbing my friend in the back, my character ended up dying from the poison she was planning to give me. Therefore, my character received karma.

I adored this project for many reasons. First I was able to develop the skills of interpreting literature. When I was first introduced to the idea of creating a theme, I was confused. How was I supposed to come up with three different pieces all with surrounding the same topic? Nevertheless, once I began working, the process was easy. I was able to come up with three unique ways to show loyalty in Beowulf and Canterbury Tales.

I feel as if I did a great job on my overall project. My best piece, I believe, was my letter to Hrothgar from Beowulf. I tried to use Old English terms and phrases in respect to Beowulf's time. Also, I was able to sum up Beowulf's loyalty in only one small letter. I would say that was a huge accomplishment!

The most challenging aspect about this project would have to be the process of choosing a topic. This project seemed incredibly large and I was worried about choosing a topic without enough substance. I'm very glad I chose loyalty as my topic because I feel as if I was able to combine three different projects to reflect that topic.

In the future, I would love to try a script of some sort. When doing this project, I felt as if I could not create a separate world or act that the characters were not already in. I didn't want to re-write the story! Now, however, I realize I would not be recreating the story. Instead I would have the opportunity to add onto the story and make it my own.

Renee is using Smore newsletters to spread the word online.