I can not even believe that our 2nd week of summer academy is over! We are at the halfway point and I can honestly say I don't want it to end! Your kids are fantastic and I enjoy having every one of them in this class. We are learning a lot and are getting to really jump into the world of VEX Robotics.

Tuesday we wrapped up our last "mechanism" challenge, this is the last build we will have that doesn't require programming. Students demonstrated excellence and the ability to think like robotic engineers! In addition, we had another teamwork challenge. Students had to transport dry spaghetti noodles in between 2 plates to the bucket. Students learned quickly that like our robotics parts spaghetti is fragile! In order for robotics to work well we need to be careful with our parts and use communication to convey our ideas.

On Wednesday we started coding in RobotC! Students really got the hang of things quickly and I am so excited to see them apply their coding skills to their new robotic designs. We are now in the "automation" phase of robotics. We take our mechanisms and add motors, sensors, and coding to make the robot perform an action.

Thursday was spent on our first Amusement Park ride, the carousel. This summer we will be designing, creating, and programming a VEX Amusement Park. We will go through different mechanisms and programming skills as we build the rides at the park! All of the Carousels turned out AWESOME! They were all given the same task but none turned out the same...Your kids are incredibly creative and talented!

Friday was a blast as we began our second ride of the summer... The SPEED RACE CAR ROLLER COASTER! We are applying gear trains that increase speed. We will see whose car can go 20 feet the fastest at our competition next week!

Andrew and Alec doing their best to focus on the task! Doing a great job communicating with each other.

They've got a system!

Samuel and Shiv quickly came up with a system that worked! They were able to share their system with the team which ultimately led them to victory!

Erica and Melanie collaborating on the best way to accomplish the task!

-Picture Day is on Wednesday, July 13. Please make sure you are wearing your teal robotics shirt.

-Class is on Monday -Thursday next week!

Things we built this week!

In order for our class to successfully battle the Empire we needed to complete all 3 tasks for our new base! We were successful in all of our missions...way to go Jedi's!

The leaders of the rebellion need to establish a head command center for their new base. They need a machine to move all of their heavy equipment, at one time, from room to room. Some of these rooms are on the second floor, so the machine should be able to traverse vertically. One of the pieces of equipment is an old R2 Unit.

The rebellion needs a rotating sonar dish that will allow them to communicate with the rebel pilots taking off and landing at the base of the new planet. The sonar dish needs to be controlled from inside the building to protect the rebellion from the invasion of stormtroopers.

In order for the rebels to thrive on their new base and continue their fight vs. the Empire they need a Jedi training facility. The Jedi training facility has only one input for power so bothtraining components must be connected. One training unit is a controlled lightsaber station where Jedis practice a lightsaber slash in a downward chopping motion. The secondtraining unit is a treadmill station to increase the speed and agility of the Jedi. 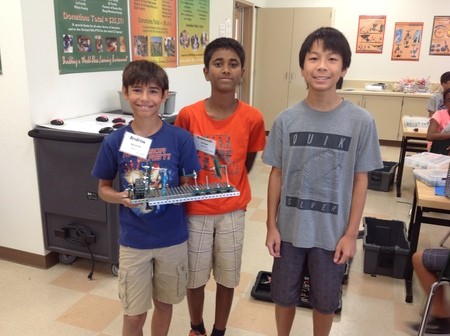 Learning about Programming in RobotC

Wednesday was a VERY exciting day in Robotics 1.5! Students were introduced to the world of RobotC. RobotC is the platform for coding with VEX. We use a Hybrid Language in RobotC that allows students to get familiar with coding language. We practice the functions in RobotC, try out several commands, and learn how to break down a complex task into small basic behaviors that a robot can perform. We spent the majority of Wednesday trying out practice problems with the cortex (brain), motors, batteries, and sensor switches. I was so impressed with how quick everyone caught on! 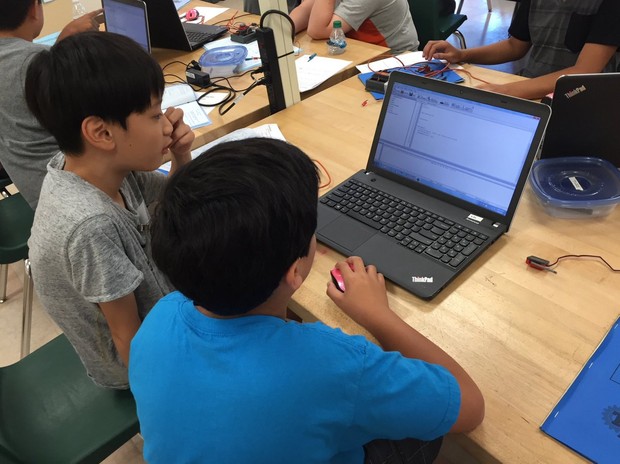 You must design a robot that will only use one motor

You must use a pushbutton to start and stop the carousel

Must have a gear train decreasing speed

Must have a looped program 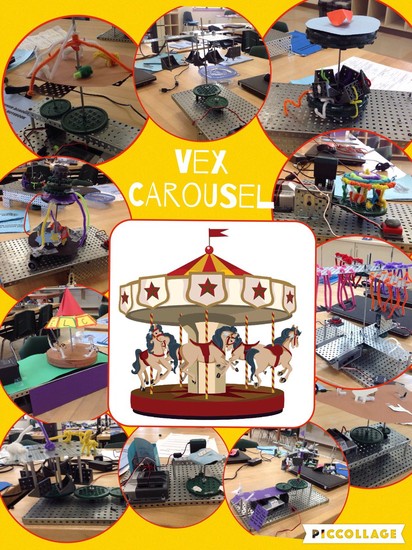 Raymond and Collin (not pictured) designed a brown base with white horses.

Alec and Dylan made a turtle, lion, llama, and unicorn design.

James and Luuke used wheels (the only group!) They had several seats with different colors.

Such a beautiful design of a classic carousel! They even had a control panel :)

The elementary robotics favorite design! They had a space themed carousel.

They had a spin on their design with hanging swings!

Nikolas and Andrew S (not pictured) made a small blue carousel.

Lucas and Corbin had a great idea to have seats hanging down from the top!

I loved their design! It was just like a carnival :) They had riders, rules, a gate, and a flag on top!

Sterling and Lance (Not pictured) made a very fast swing design!

Such a rockstar! She worked by herself on the entire project. She designed, coded, and built this adorable carousel with animals!

Andrew and Samuel made a classic carousel with a few seats.

Andrew and Shiv (not pictured) made a carousel and bonus coded the ride to spin in all direction!

The elementary kids loved this design!

Andrew teaching students (and his sister) about his design!