Tabitha is using Smore newsletters to spread the word online.

Get email updates from Tabitha:

Transcription: In a Nutshell

After transcription, the RNA that is synthesized in this process is then moved to the cytoplasm, to be translated into a protein. However in eukaryotes it is not immediately ready, as Eukaryotic mRNA requires extensive processing. This processing helps the RNA molecule to be recognized by molecules that mediate the translation of RNA into proteins, and cuts out portions of the RNA chain that are not supposed to be translated.

Capping and the Addition of the Poly A Tail

Capping occurs very early during the synthesis of mRNA. Capped mRNAs are very efficiently translated by the ribosomes to make proteins. When the RNA chain is about 30 nucleotides long, the 5' ends are modified by the addition of a guanine group in the opposite orientation. This modification leads to the formation of the cap, which works to protect the growing RNA chain from degradation. Then something called Polyadenylation happens. Nascent RNA is moved from the AAUAAA sequence by ribonuclease. The enzyme Poly A polymerase then adds adenine ribonucleotides up to 200 bases long at the 3' end of the RNA creating the the Poly A tail. This tail enhances the stability of the mRNA and regulates its transport to the cytoplasmic compartment.

capping and poly A tail 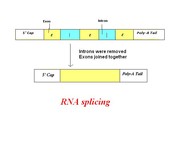 Splicing is the reaction that removes unnecessary segments of the RNA known as introns. The removal of the introns creates mRNA which contains only exons, which are portions of the RNA that will be translated into proteins. An intranuclear protein called the spliceosome helps to ensure proper splicing. There are also three types of short sequences that dictate the precise cutting of the intron amd exon boundaries called splice junctions. These are the splice donor, the splice acceptor, and the branch site. Two sequential cuts occur, first the splice donor site is cleaved, then the splice acceptor site is cleaved. Finally the intron degrades and the two exons are ligated.
DNA Transcription (Advanced)

Tabitha is using Smore newsletters to spread the word online.