Georgiànna is using Smore newsletters to spread the word online.

Get email updates from Georgiànna:

Due to impending "Snowmageddon Jonas" the Membership meeting scheduled for tomorrow at Phil's Tavern, Blue Bell, PA is cancelled.

The meeting is now cheduled for February 20! We will kick off the new year of club activities with our Happy Dinner Hour event supporting Beg, Borrow and Steel on February 20, 2016, at Phil's Tavern, Blue Bell, PA beginning at 7:30 PM until ????? 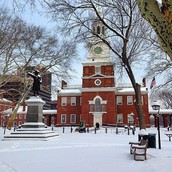 Due to impending snowstorm/blizzard we don't know what condition the roads will be like on Sunday, The shelter has contingency plans when this happens.

The club will check with the shelter's calendar to rechedule for a later date.

Georgiànna is using Smore newsletters to spread the word online.