Get email updates from Uxbridge:

A MESSAGE FROM THE PRINCIPAL

Welcome to the first Uxbridge High School electronic newsletter, which replaces our traditional termly letters. I hope you will agree that this will engage and inform parents in a more interesting and interactive way.

The newsletter allows us to easily and quickly share pictures, videos, events and highlights of school life as well as to communicate important messages and updates. You will find that you can quickly navigate the document and articles, picking the items that are of most interest and relevance to you. You should find that for your convenience and ease, the document is compatible on all devices, such as tablets and smart phones. We hope to develop and extend the newsletter in the future and I would welcome your feedback and impressions of this first edition.

In this newsletter we are delighted to highlight some fantastic sporting achievements, impressive history work and a student review of an exciting drama opportunity.

For automatic updates, please feel free to follow the page and/or use the links to our Twitter feeds which are at the end of the newsletter.

May I particularly thank staff who are giving up parts of the break to work with those students now in full examination preparation and parents for the invaluable part that you are playing in supporting the students at home during this important preparation period.

I wish you all a happy and safe half term.

Working in technical theatre was a completely new experience for me, so I was naturally pretty nervous when I arrived in one of the Royal Shakespeare Company’s theatres in Stratford-upon-Avon on Tuesday. Luckily, we were supported by industry professional, Simon Spencer, who managed to teach us so much about not only the lighting set-up and programming, but also how to design lighting for a stage performance in just four days. Lighting a show like The Tempest was particularly interesting, because we were able to portray not only the harsh, naturalistic environment of a desolate island, but also the magical (and in our version, colourful) environment conjured when Prospero summons Ariel, his magical servant.

The process began by watching a rehearsal of the scene and later discussing the types of colours and angles which would be best for particular shifts in time and atmosphere. After setting up the various colours and positioning the lamps perfectly (it takes longer than you would think), we trialled various lights together to see which lights would be appropriate for each section of the scene, quickly learning that you need much more open white light than we anticipated to actually light the actors’ faces! In addition to applying our own ideas, we had to take into account the interpretation of the director and his lighting requests for particular moments of the scene. I sat in with him, during a meeting, and he informed us that he wanted characters frozen in time with white light, which involved being flexible with the choices we had already made for said moments to incorporate such.

Friday – the performance date – was incredibly rewarding, as we were able to see the work completed not only by the technical team, but from all other departments, come together to create a visually dynamic and atmospheric production. While the technical rehearsal was complex and lengthy (adjustments had to be made to lights, sound, digital projections, costume, set and props), watching the final performance made all the hard work worthwhile.

Although I have said it many times, thank you so much again to the RSC for giving us the opportunity to work alongside such dedicated and knowledgeable industry specialists. It provided me with a fascinating insight into theatre that I have never been given whilst just being onstage in the past. Thank you in particular to Simon, for guiding us through the process so patiently and efficiently!

Last week was e-safety week, where our students learnt more about how to keep safe online. Please click on the link for some useful tips - www.internetmatters.org/wp-content/uploads/2015/06/ncro5w-Internet-Matters_E-safety_11_13_YearOlds1.pdf

Year 8 Hebah Malik’s propaganda poster to inspire people to sign up for war during the Second World War. 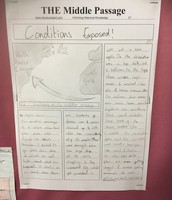 A group of Year 9 students visited the Imperial War Museum on February 9th 2017. Travelling by coach into central London, it was a chance for students to get a further insight into topics they have been studying in history.

For the World War I exhibition, students were tasked with completing a 'Treasure Hunt' worksheet, noting down many key facts about the war - how and why it started, where the battles were fought and how it eventually came to an end.

Students visiting the Holocaust exhibition gained a further insight into how Hitler rose to power and how his ideas spread throughout Europe, ultimately affecting people all around the world. The personal stories of those who lived through the Holocaust were particularly harrowing.

Students spent their spare time wandering many of the museums other exhibitions and of course in the gift shops! The behaviour of every student was exemplary, doing themselves and Uxbridge High School proud. 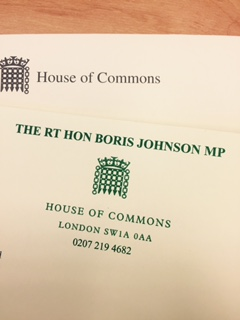 Our Young Enterprise team were very excited to receive a letter from Boris Johnson!

A MESSAGE FROM MS BARBER, HEAD OF SIXTH FORM

It is a pleasure to have joined Uxbridge High School and the Spring Term has started with of a number of exciting opportunities across the Sixth Form including the start of the Year 11/12 Russell Group Programme, Year 12 Work Experience, Raising Aspiration Programmes for Law, workshops at Brunel University and a number of employability and social skills workshops.

It has also been an exciting time for Year 13s who have been receiving their university offers. Students have secured offers at Durham, Liverpool, Queen Marys, Brunel, Surrey, Sussex, Royal Holloway, to name but a few.

We are looking forward to interviewing prospective Year 11 students after half term to join our expanding and developing Sixth Form.

UHS student Alex Old is one of 5 candidates running in the Hillingdon election. Please visit our website, using the link below, for more details.

What is the UK Youth Parliament?

Run by young people for young people, The UK Youth Parliament (UKYP) provides opportunities for 11-18 year-olds to use their voice in creative ways to bring about social change. The UKYP is made up of over 300 MYPs (Members of Youth Parliament), who are elected by their peers in youth elections throughout the UK. Any young person aged 11-18 can stand or vote.

What is a Member of Youth Parliament?

Once elected, MYPs organise events and projects, run campaigns and influence decision makers on the issues which matter most to young people. For example, MYPs meet with MPs and local councillors, organise events, make speeches, hold debates, and ensure the views of young people are listened to by decision makers. Hillingdon has two MYPs elected annually who work closely with the Hillingdon Youth Council.

Who can vote in the election?

Student literacy reps have been working hard to prepare a video for the World Book Day assembly. Here they are discussing inspirational books with Mr Clemens:

Congratulations to Abdirahim Hamud who came first in the Middlesex U13 Cross-Country Championship! 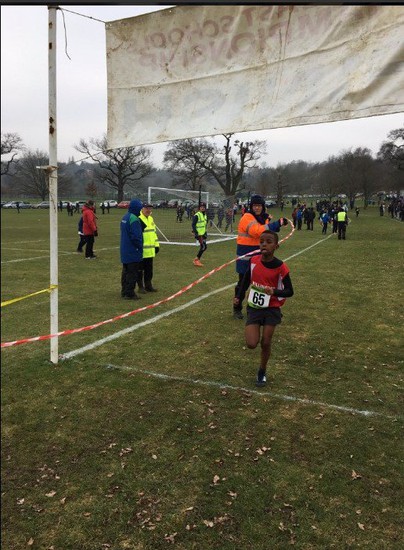 On 10th January, Uxbridge High School students competed against a number of schools including Stockley, Barnhill and Swakeleys at this year’s semi-final of the Indoor Sports Hall Athletics competition.

UHS dominated across a number of events with both girls and boys picking up 1st place in many events, with the boys just falling short of a clean sweep throughout the field events. Both Year 7 and 8 boys convincingly won the relay race, nearly lapping some of the other schools.

DATES FOR YOUR DIARY

RSC PERFORMANCE OF THE TEMPEST

We are pleased to announce that the RSC are coming into school on Thursday 16th March for an evening performance of The Tempest, which starts at 6pm. Tickets will be available for booking for staff and students from Monday 20th February 2017 from Lancaster Reception. There is no charge for the event but tickets are limited and so will be available on a first come first served basis.

twitter.com
The latest Tweets from UHS Performing Arts (@UHS_PA). News and Updates from the Uxbridge High School Performing Arts Department. 'If music be the food of love, play on.' Find out more: @UxbridgeHighSch. Uxbridge, London