The Barnegat Schools Have So Much to be Thankful For

Here in Barnegat, we have so much to be thankful for. This newsletter will highlight the accomplishments of individual students as well as groups of students. I recognize that these accomplishments happen when wonderful things are happening in school, like teachers and coaches going the extra mile to support students partnered with parents who want the very best for their children. I hope you take as much pride as I do in the following accomplishments that continue to make Barnegat shine.

summer. Sarah was invited to a ceremony on Sunday October 8th at Princeton

University where not only were the top 33 recognized, but the top 3 received an

additional award; Sarah placed 2nd! We are extremely impressed and proud of her!

school history. The band has come in 1st place in 4 of the 5 competitions it has

competed in and has watched its score steadily rise each competition. In the 4

competitions where they took first place, they also had the highest music scores and

visual scores. The auxiliary (color guard) has come in first place at 3 of the 4

competitions, which featured an auxiliary judge, and the percussion section has won

best percussion twice during the season. This season the Marching Bengals competed at Southern Regional High School where they were awarded Grand Champion for having the highest score in the entire competition. At NJ State Championships the Marching Bengals came in second place out of 49 bands in their classification and won best visual effect at Championships. They routinely came in first in second in competition and often won best visual and guard. Thanks to our hard working music, drill, percussion and guard instructors as well as the many band parents who support our music program.

November 3rd, Veterans day celebration in downtown Barnegat at the Gazebo with the

Music Hall in Waretown, NJ on the night of November 11th, home football game on November 22 and the Pearl Harbor remembrance service on December 3rd at the Barnegat Dock with the American Legion. It is wonderful that the Barnegat Schools continues to be part of our community with pride and respect for our country.

in its 23rd season and airs on NJTV. The show is the only television program in the

country devoted to featuring the positive things happening in public schools. On October 29t, our very own Barnegat High School, Ms. Elko was featured. Her segment was called “Reach Before You Teach". Please take a moment to view it here: http://classroomcloseup.org/segments/reach-before-you-teach/ What a wonderful impact Ms. Elko is having on our students!

honored by the VFW for their Patriot's Pen essay. Emman Carman, 7th grade was

Panico, 8th grade was awarded third place. Each of the students was given a

certificate, a $100.00 check, a pen, and a dog tag with their name. I am thrilled that the school district continues to have an outstanding relationship with the VFW and that the Township Committee acknowledged our amazing teachers for their hard work and

Also on December 5, at the Township Committee meeting, the Barnegat VFW Post #10092 presented the winners of the Voice of Democracy Essay Contest from Barnegat High School. Congratulations to the winners! 1st place: Justin Bach,

for their service and support of the Barnegat Township Schools.

Boardwalk Hall in Atlantic City at the second annual Christmas Spectacular. They were in the company of well-known professionals. The Select Choir also performed at the Borgata with the Stockton University Choir on December 10 and were featured on WOBM on December 4th.

Whether you are a parent or teacher, board member or committee member, volunteer or coach, I am grateful for your support of our amazing school district and both student and teacher accomplishments this holiday season.

Barnegat Named Town of Excellence Due to School's Efforts

On Tuesday, December 12 the Barnegat School District and Township of Barnegat were honored by the RWJ Barnabas Health Institute for Prevention’s DART Prevention Coalition. This year the only town in Ocean County receiving the Township of Excellence Award was Barnegat.

In an effort to retain these important programs, the Barnegat School District has aggressively sought other funding sources. In July, the Prevention and Wellness Coalition of Barnegat was founded by Superintendent, Karen Wood. The school district will be applying for a Drug Free Communities grant in the spring. Generally issued to townships, the school district sought support from RWJ Barnabas Health to begin preparing for grant submission.

In order to qualify for the grant, twelve sectors must collaborate. Some of those sectors include the school district, municipality, local business, health care provider, faith based organizations and civic organizations. “I knew we had to act fast”, Wood stated. “We had to get in touch with representatives from all sectors, and begin meeting.” The grant application calls for a minimum number of meetings with agenda, minutes, surveys, and data collected from the community and school district in order to apply for the Drug Free Communities grant.

“Being recognized as a Town of Excellence is such an honor”, Wood said at the recognition ceremony on December 12. “I’ve been Superintendent for seven years in Barnegat and I have always known this community to come together for our students. The newly formed Coalition is impressive. They come together each and every month for the benefit of our school and our community. The issue of prevention is important to all of us.”

Manager, Michael Kapko of the DART Prevention Coalition said, "The commitment from the school district is absolutely phenomenal. I cannot say enough about the schools and the people we've had the chance to work with, not just in the past year but in years leading up to this as well." 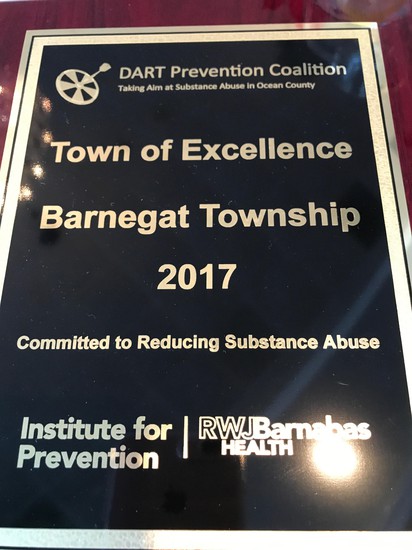 The Holidays are an exciting time for many students but many families face challenges like finding affordable day care, camps, or activities to keep their children busy while they work. The article below may give you some ideas on how to navigate during Winter Recess, keep your children engaged and start 2018 refreshed!

www.skillsyouneed.com
Many parents, especially working parents, dread the school holidays but, with a little careful management, they can become a much easier time. Discover how.

I wanted to take a moment to wish all of our Barnegat Schools Families a very Happy Holiday season and a wonderful New Year. Please do not forget that Friday, December 22 is an early dismissal day for all schools. My wish for all of you is for health and happiness in the New Year. Here in our six schools, our goals remain the same - to provide a nurturing environment where students can reach their highest potential. For some students that means excelling in academics, while for others it's athletically, socially, or through the arts.

Thank you for continuing to support our schools. Wishing you a joyous Holiday Season and a very Happy New Year. 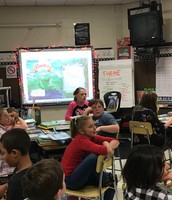 Students remain engaged and excited as we approach our Winter Recess!

Have you filled someone's bucket today? If not, the day isn't over yet. The students from LMDS practice bucket filling. For their nomination, a lucky student receives a reward. Great job, LMDS!

Even our very littlest hands are in the Holiday Spirit! Check out their gingerbread houses. Great job, Cubs!

Follow Colette Bach
Contact Colette Bach
Embed code is for website/blog and not email. To embed your newsletter in a Mass Notification System, click HERE to see how or reach out to support@smore.com