The deadly disease in Africa

The deadly disease in Africa

AIDS begins with a person having HIV. It is especially a problem in Africa. HIV stands for human immunodeficiency virus. People can get HIV by having unprotected sex, contaminated blood transfusions, or by using infected needles. In Africa, people are not educated about this. There is not a cure for HIV, but if treated you can avoid AIDS for an extended period of time. If a person has AIDS and then is infected with a disease, there is a way higher chance of them dieing than a person without AIDS. People have lost their dreams in life because of AIDS. In Sub Saharan Africa, already one of the poorest places on Earth, there is 70% of the World's HIV. Now not only do children have to worry about starving, but AIDS. 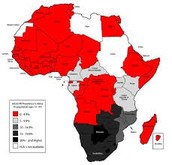 An African infected with AIDS