Get email updates from Phoebe: 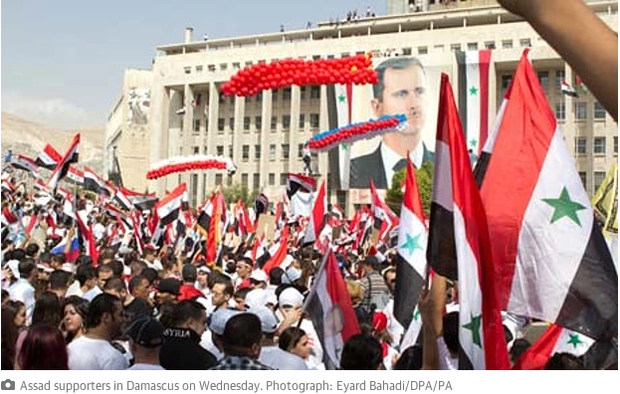 The heading in this article basically summarizes the whole text because the title is exactly what the author talks about in the text. The title is somewhat grabbing to readers but I think it could be a little better. Maybe the author could have made the title a little more violent to maybe grasp the readers who already know the main facts about the Syrian Civil War and just want more detail. The article title is slanting in the direction of that the Syrian Civil War is going to happen no matter what and there is no way to stop it. The title also says, “full blown” that could mean that it not just going to be a small little fight it's going to be a long battle.

Sliding, uprising, militant, Flat Footed, Intervention, Sanctum. These six words I found in this article and they are politically charged labels. Sliding and Flat Footed are used to sway the reader in the way that the author wants the reader to think. It can be used to make the reader think that a person or object is lower or falling behind. Militant, uprising, and intervention are used for showing that an event is worse than it is. Sanctum is also used to show or tell something that it is better that it actually is.

In one paragraph towards the beginning of the article it cites and anonymous source calling him, “one man speaking on phone from Homs”. From the context in the quote this man was in the security forces, which leads me to believe that that man did not want his name in the article because someone going against the security forces could find him, hurt him or even kill him. The man is being anonymous for the safety of his life. Also in the last couple of sentences in the article there is another anonymous source, this time it is a protester from Homs. At the end of the protesters statement that was very harsh towards Bashar, he said he would not give his name. This is obvious that this man does not want to give is name because he is a protester and against Bashar, if he gets caught he will be in a multitude of trouble. Other than those sources all the other sources were not anonymous. The two other sources that the author used were the UN and the US Officials.

In this article there is only one picture with a caption. The caption reads, “Assad supporters in Damascus on Wednesday”. The photo and the caption don’t really go with the story. Yes it shows the supporters of Assad but there are no pictures of the protests or the fights and riots. This picture does not grab readers like it should because frankly, it is a boring picture. You could say the author might want to influence Assad since he put the picture right at the beginning. The picture seems pointless because it has very little relation to the article.

This article has common sense; they are no real facts or misstatements that are senseless. The author in this article explained more and described in this article than stating nonsense or trying to sway your opinion.

During this time there were no polls going on and also there were no real statistics in the article except for the people who were killed. Percentages might have been a good statistic for this article to get an idea on who was on Assad’s side and who was not.

Why is there only one photo?

How does the author get in contact with the anonymous sources? 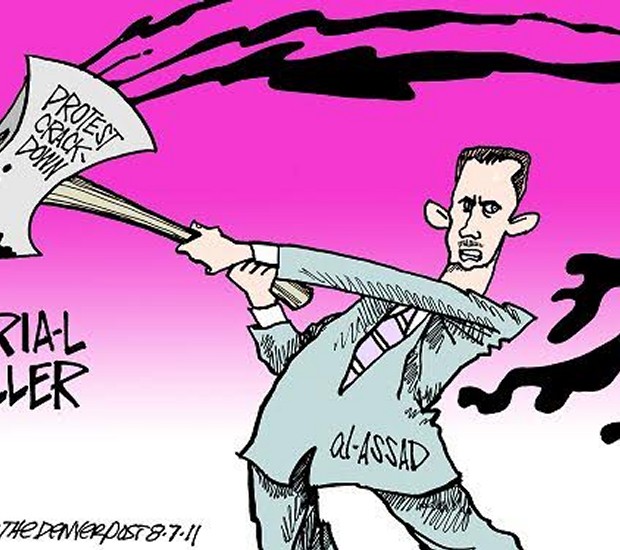 The cartoon above represents a time in 2011 of Assad, the President of Syria, and his actions against his people, especially those in protest against him. This cartoon depicts Assad as cruel and malevolent. His face is distorted with large ears and a large forehead representing Assad’s characteristics. He also is, distorted to look larger in the cartoon with a perspective of the viewer looking up at him in the Cartoon. He wears a sadistic look on his face portraying him in a very negative light. An ax incorporated into the cartoon representing Assad killing his people. Black streaks of ink represent the shed blood of his people. The suit wears shows power. His facial expression symbolizes his merciless demeanor.

His coat says “Al-Assad” which labels who he is. “Protest Crack-down” is written on the ax to show that Assad’s way of stopping protests is by killing them off. “Syria-L Killer” is captioning the cartoon as a play on words for Serial Killer, which is what the cartoonist is suggesting of Assad. The message of the cartoon is to depict Assad as a “serial” killer of his people. The artist persuades the reader with the use of a grotesque imagine of a murder some leader who will not tolerate protest. I think the artist is trying to get his readers to react to the fact that Assad is killing his people in Syria. 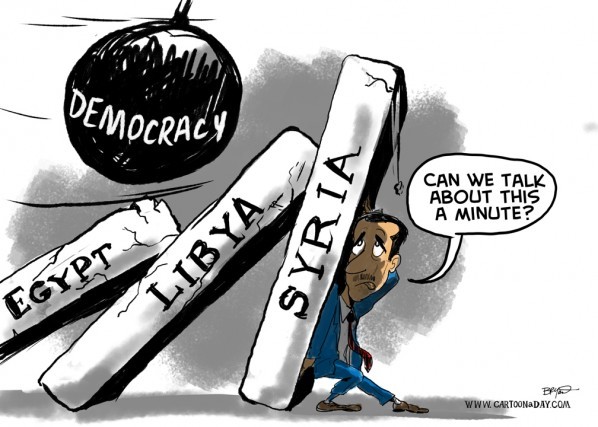 This cartoon depicts the changing political situation in the Middle East, especially in regards to Syria and Bashar al-Assad. It has captured a change in times in one, collective image. The cartoon shows democracy taking over the Middle East, and Syria’s effort to attempt to not be affected by the change. Bashar al-Assad is the figure in the cartoon that is representing this idea. This political event is presented in the cartoon by a powerful wrecking ball that is knocking down three established blocks (regimes), like dominoes. The first two are falling, but the third is trying hard not collapse like the others. Egypt and Libya are the countries in the cartoon that are making a painful, but desirable transition to democracy, and the cartoon implies that Syria will eventually make the transition as well. The cartoon shows democracy as a contagious disease, plaguing the Middle East, about to infect Syria.

There are many symbols that are depicted in this political cartoon. The first is the wrecking ball which symbolizes democracy. The wrecking ball is knocking down blocks (which are falling like dominoes) and this symbolizes how democracy demolishes oppressive regimes, and they fall to democracy in a domino effect. Egypt and Libya fell and Syria is propped up by a puny Assad. The dominoes represent how Syria will eventually fall. The three blocks that seem to be dominoes represent the countries in the Middle East that have/will convert from a dictatorial regime to a democracy.

There is no caption to accompany this cartoon, but there are many labels which emphasize key ideas within it. The labels on the “dominoes”/blocks falling, are Egypt, Libya and Syria. These are written to indicate what the blocks represent: the countries falling to democracy. Without these labels, it would not be clear what is going on in the cartoon. Also, the label “Democracy”, on the wrecking ball shows what impact the wrecking ball is having on the blocks. It emphasizes an idea that would not have been clear without the label. These labels contribute to the cartoon’s message, because without them, we would only see blocks being knocked down by a wrecking ball. They provide us with the background information needed to analyze the cartoon. The speech bubble in the cartoon is Bashar al-Assad saying, “Can we talk about this a minute?”. This is Assad trying to call for a time out, as he is attempting to get a reprieve from the wave of democracy. However this action of his seems like a little too late, because there are no more time outs left this late in the game. The speech bubble contributes to the cartoon’s message because it repeatedly points out how Assad is helpless against the “plague” of democracy.

The overall message of the cartoon is that democracy is a forceful, wrecking ball that has knocked down the established regimes of Egypt and Libya. Syria has been nudged, but not knocked, and it looks as though it is about to fall, despite the lacking efforts of Bashar al-Assad. The artist is trying to persuade the reader by showing a sense of movement or momentum, starting with the wrecking ball and continuing with the moving dominoes. It almost looks like the fall of Syria is inevitable.

The impact/reaction that the artist is attempting to trigger is the fall of Syria’s oppressive regime and the beginning of a democracy. 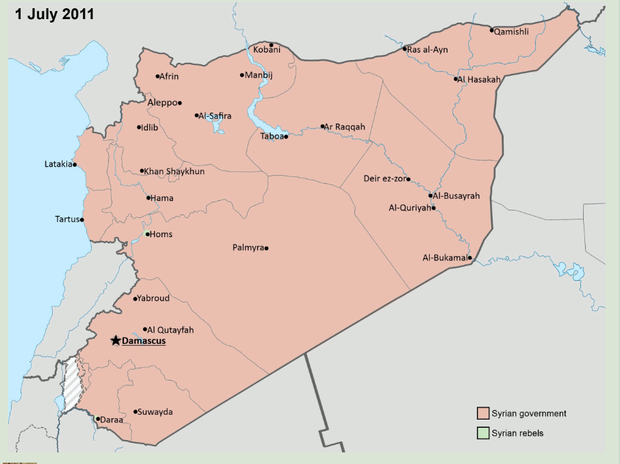 This map is consistent with the war activity reported during July 2011. Most of the Syrian opposition was focused in the early years in the city of Homs where there was considerable street fighting July through October 2011. Most of Syria was still under the Syrian government (Assad) which is shown in the map in pink.

Although Isis had begun to penetrate Syria, this map does not show any areas where Isis had a presence. Even though it is early in the war and the government still dominates most of the country, this map is very simple and leads the reader to believe that the rebel protest is very minimal and is limited to the two areas of Homs and Daria.

The map does not have a scale, nor does it indicate what the gray lined area is. What is the grey space area that is lined? It also does not have a title other than the date. It does not show the surrounding countries so it is difficult to see how the refugees flee the country later in the War.

It would be helpful if the map showed additional information, particularly population as well as the geography of the country. How many people were under the Syrian government’s control and how many were Syrian Rebels as of July 2011?

1. Why did Bashar al-Assad crack down so hard on the Syrian people, when it could have been done a different way?

2. To what extent would the Syrian people go before giving up on their protests against Bashar al-Assad? How dedicated were they to their beliefs?

3. Why did Abu Bakr al-Baghdadi start a new branch of the extremist organization, ISIS, in Syria? What were his motives for this operation?

4. Why and how did the Arab Spring spread to Syria, and how was Syria's situation different that other Middle Eastern countries?

5. Why does dissent spread across borders?

6. How does the majority of a population feel when they are ruled by a minority?

7. How were Syrian people's daily lives affected by having family members and friends join the Free Syrian Army to fight for what they believed in?