matthewLAUPEPA is using Smore newsletters to spread the word online.

Get email updates from matthewLAUPEPA:

how can we stop the abuse of power ?

how can we stop the abuse of power ?

The setting of the book is Gordon High School in Spring 1969. The plot revolves around a history teacher Mr. Ben Ross, his high school students, and an experiment he conducts in an attempt to teach them about how it may have been living in Third Reich Germany. Unsatisfied with his own inability to answer his students' earnest questions of how and why, Mr. Ross initiates the experiment (The Wave) in hopes that it answers the question of why the Germans allowed Adolf Hitler and the nazi party to rise to power, acting in a manner inconsistent with their own pre-existing moral values.

the hand sign when mr ross enters the room

similar hand gestures when hitler was there 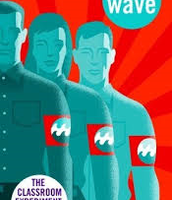 trailer of the wave

How can we stop the abuse of power in the world today?

Explains and connect it

The abuse of power in the world today can stopped through, education; create awareness and campaigns and ban all groups that have relation to abuse of power. For example, the abuse of power and how it can be stop is evidently seen in the novel ‘The Wave’ by Morton Rhue. The abuse of power is when someone has more power over another person, for example, it could be his or her social position, physical strength, knowledge, technology, weapons, wealth, or the trust of others in him or her, to use that power to hurt or harm another individual or group of people who are vulnerable.

The abuse of power in the world can stopped through education and knowing what you can do to prevent it, this is clearly seen in the novel ‘The Wave’ by Morton Rhue with the two main characters Laurie and her boyfriend David. Laurie approaches her boyfriend David and tells him to stop the group ‘The Wave’ and they get into a heated argument which results in physical abuse where Laurie states (open quote) through the use of emotive language he recognise that his is a serious matter and goes to the teacher to confront him about the issues (which is the leader) to stop the whole group. The teacher eventually recognises that the group is getting out of control and holds a meeting for the whole group (The Wave) and his powerful speech finally gets through to the each member of ‘The Wave’. This clearly shows through education that one can recognise the abuse of power and the measures to stop the abuse of power.

The abuse of power in the world can be to ended by upholding and creating awareness and campaign to avoid the abuse of power, in the novel ‘The Wave’ by Morton Rhue this is clearly seen when Laurie’s story appears in the school newspaper, where many students do not like it because it states bad things about ‘The Wave’ this is clearly seen in the quote. The principal of the school and Mr Ben Ross wife who is also a teacher at the school inform to him that the group is unmanageable and if the group doesn’t stop then someone will die this is evidently seen in the quote and through the use of (technique). This indicates that through the use of creating awareness and campaign that one can identify the abuse of power and the asses the issue to stop the abuse of power.

matthewLAUPEPA is using Smore newsletters to spread the word online.