Ji is using Smore newsletters to spread the word online.

Get email updates from Ji: 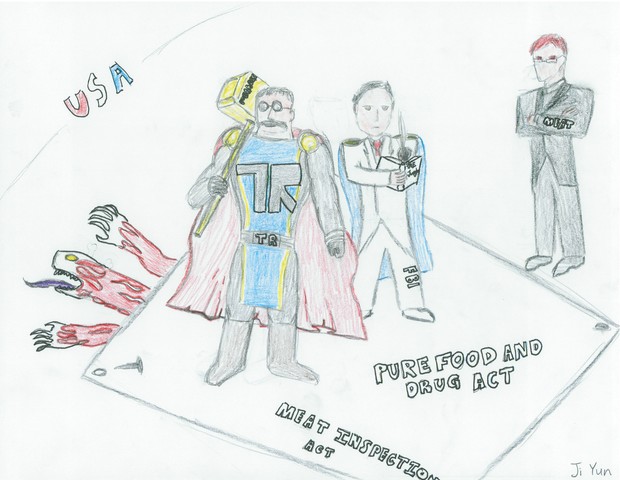 The Food Bypass Inspector-Upton Sinclair- The FBI, although not in the best of terms with TR, went undercover and wrote a novel, The Jungle, revealing his research on the unsanitary conditions workers had to work in to process meat. His novel was met with the response of uncomfortable stomachs of readers. This support resulted in the empowerment of TR's hammer, Congress, and the defeat of his nemesis.

The Meat Syndicate are an organization in control of the purity of meats in America. Their leader, Lord Sordid, was given the title for the filthy condition his meat empire. His dirty work is completed by the Meat Monster. He is responsible for the following offences:

-He has disregarded the sanitation of meat transportation all over the United and States and the World in order to reduce costs and in turn increase their profits,

-He has supervised the distribution of misbranded meat.

-He has purposefully slaughtered meat under poor sanitation to further contaminate meat.

-He has allowed unsanitary regulations of employees to process meat.

-He has kept his active duties in uncleanliness away from public eye to give customers meat that was processed under questionable circumstances.

In response to his nemesis, TR has locked away the Meat Monster, reducing the possibility of meat contamination along with other foods and drugs. In order to do so, he used his almighty hammer, The Congress, to bind Lord Sordid and the Meat Syndicate under the legislation of the Pure Food and Drug Act and the Meat Inspection Act ending their evil reign over the stomachs of the American population.

Ji is using Smore newsletters to spread the word online.

Follow Ji Yun
Contact Ji Yun
Embed code is for website/blog and not email. To embed your newsletter in a Mass Notification System, click HERE to see how or reach out to support@smore.com
close