Natyana is using Smore newsletters to spread the word online.

Get email updates from Natyana:

Brutus Cries Out For Innocence

Marcus Brutus, a servant and close friend of Caesar... Brutus is supposed to be Julius Caesar's BFF but he ends up stabbing him in the back, literally...

Brutus's decision to stab Caesar in the back wasnt a easy one. He has to choose between his loyalty to the Roman Republic and his loyalty to his friend, who seems like he is very ambitious. When Brutus hears how the romane were treating Caesar like a celebrity , he worried for Rome.After killing Caesar and washing his hands with the blood, Brutus defends himself with these lines:

"If there be any in this assembly, any dear friend of

Caesar's, to him I say, that Brutus' love to Caesar

was no less than his. If then that friend demand

why Brutus rose against Caesar, this is my answer"

Was he wrong ? Did he kill him for his own personal reasons and say it was for Rome or did he mean it ?

Conspirators turn their back on their "FRIEND"

All of the conspirators are envious towards the Caesar and rather one of them being the new ruler. 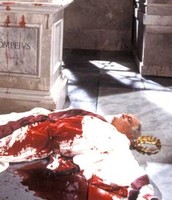 Natyana is using Smore newsletters to spread the word online.