This disease is caused by "assassin bugs" who suck your blood and that causes the protozoa Trypanosoma to pass the disease through its host; humans. The bugs do not enter the human until the place that the bug bit is scratched by a human which causes the skin to be aggravated. Some symptoms of the disease are fever, swelling and redness at the site of the bite.

African Sleep Sickness is caused by parasites invading the lymphatic stream and then eventually crossing over to the blood stream. These parasites enter the person by the tsetse fly biting the person. In this situation, the tsetse fly acts both as the host and the vector. Some symptoms of this disease are fever and headaches at the beginning stages and then lead up to sleep contusion hence the name African Sleeping Sickness. 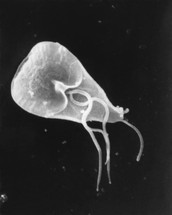 Giardiasis is caused by an infectious protist called Giardia lamblia. This is a disease that is spread from person to person through contaminated water. A parasite then enters the small intestine and produces some bad symptoms which include; vomiting, stomach cramps and diarrhea.