Get email updates from Jillian:

Is your community's environment safe?

Is your community's environment safe? 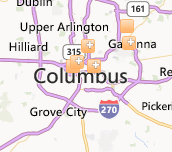 Superfund site
Superfund is the name given to the environmental program established to address abandoned hazardous waste sites. As of yet, there are no Superfund sites in Columbus even though two have been proposed.
The Rickenbacker Air National Guard Base (USAF) and the Air Force Plant 85 were both proposed in 1994 but there are no plans for construction.

Brownfield site
A brownfield site is land previously used for industrial purposes or some commercial uses. The land may be contaminated by low concentrations of hazardous waste or pollution, and has the potential to be reused once it is cleaned up

Radon- in your home's indoor air, the soil and the water supply
can cause lung cancer
Particulate Matter- premature death in people with heart or lung disease,nonfatal heart attacks, irregular heartbeat, asthma, decreased lung function, irritation of the airways, coughing or difficulty breathing
Carbon Monoxide- reduce the oxygen-carrying capacity of the blood
Nitrogen Dioxide- irritate the lungs and lower resistance to respiratory infections such as influenza
Lead- affect the nervous system, kidney function, immune system, reproductive and developmental systems and the cardiovascular system and can also affect the oxygen carrying capacity of the blood
Sulfur Dioxide- broncho-constriction and increased asthma symptoms

Second leading cause of death in Columbus

Lung cancer is the most common 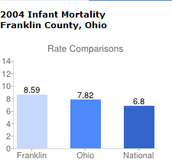 The infant mortality rate is among the highest in the nation and the state has put in over $3million for newborn screenings
In Columbus, nearly 160 infants do not reach their first birthday each year

The Scioto River begins as a small creek about 80 miles north in Hardin County, northwest of Kenton, Ohio, this river remains a main water source for Columbus. The Griggs and O'Shaugnessy Reservoirs, located on the Scioto River, hold only a small percentage of the water that flows through Columbus.