Scutes- A snake's scutes are the wide, flat scales on its belly.

The snake's scutes,smooth and cool, grew smaller near its tail.

Constrictors- A constrictor is a snake that kills its prey by squeezing them to death.

The constrictor curled around a branch, waiting for its prey.

Foraging- Foraging means to search widely for food or provisions.

The mouse, tired and hungry, foraged for nuts and berries.

Snakes are truly amazing creatures. This summary explains all about them!

Five snake families call planet Earth their home. They are the Colubridae, Boidae, Pythonidae, Viperidae and Elapidae families. Colubridae are the largest and most common family and most are non-venomous. Boidae and Pythonidae are the Boa and Python families, including Anacondas, and other constrictors. Viperdae have long fangs that fold back and lie flat against the roof of their mouths when not in use. Rattlesnakes, Copperheads and Cottonmouths inhabit this family. All Viperidae are venomous. Elapidae have short, fixed fangs and are highly venomous. Taipans, Kraits and Cobras dwell in this toxic family.
Th four snake movements are used by the five snake families. The movements are Serpentine, Concertina, Caterpillar and Sidewinding. Sidewinding is usually used in the desert, and as a result, is used by desert snakes. To Sidewind, a snake anchors its head and tail, thrusting its middle forward. It then repeats this pattern, but it thrusts forward with its head and tail this time, continuing at a forty five degree angle in the direction it's traveling in. This movement is used most by the Viperidae and Elapidae families. The second movement is Serpentine. Serpentine is the most common movement. A snake contracts its muscles, starting at the neck. The muscular waves produced bounce off objects and push the snake forward. The result is an s-shaped wriggling from side to side. Serpentine is used by all snakes, but is particularly useful to seas snakes. It can be used on land and in the water. The next movement is the Concertina. Concertina is a tree based movement and used often by tree snakes. Colubridae and Elapidae use this movement the most. The snake grasps a branch with its tail, and thrusts its head and top forward. The snake then holds with its head, and pulls its tail forward. The final movement is the Caterpillar. The Caterpillar movement requires a rough surface. A snake uses its belly scutes to pull itself forward. This movement is very slow.

This is a connection I made when I was researching snakes.

The way snakes have different movements for different environments seems very efficient to me. It enables snakes to travel with ease on all sorts of terrain. It also reminds me of the efficiency Meerkats have when foraging and hunting. When Meerkats find a suitable location to forage or hunt, a lookout and a babysitter are assigned to keep watch on the camp. The lookout, or sentry's job is to watch the sky and savannah for threats such as servals, hyenas and eagles. If an enemy is spotted, the sentry calls out an alarm and the Meerkats return to the safety of their tunnels. The job of the babysitter is to watch the young Meerkats while their mothers are out hunting. It's also part of their job to make sure the young Meerkats can get to safety easily if the need arises. The safety of the colony depends on the efficiency of each member. That is why snakes' efficiency reminded me of the Meerkats' foraging/hunting strategy. 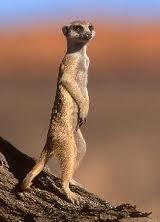 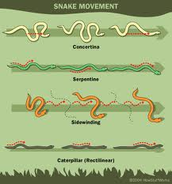 This diagram is showing the four movements.

Sidewinding is often recognized by the unusual tracks left in the sand!

This sea dweller is swimming in a serpentine movement!

This video was created by snake135

This video was created by snake135