Katiee is using Smore newsletters to spread the word online.

Get email updates from Katiee:

The literary elements are shown in the graphics of this story in almost every picture. It shows you Rabbit, the Mouse, and when something went wrong. It showed you how Rabbit tried to fix it, and how "trouble follows" him wherever he goes. The last page shows how no matter what Rabbit does, his friend Mouse still loves him. It also shows that Rabbit tries to fix everything he has done wrong, or the things he got himself into.

The trouble Rabbit gets himself into this time is his friend Mouse and him we playing with a toy airplane. The airplane gets stuck in a tree and Mouse has fallen out of the plane. Rabbits idea of fixing it is stacking a bunch of animals together to try to retrieve the plane. Since it is Rabbit, and trouble always has to follow him, the toy plane is just out of reach. He has another idea to try and reach even harder, but all of the animals fall down and get mad at him. Eventually the toy plane gets out, and Rabbit and Mouse begin to play again.. Which causes more trouble.

The drawings in this book vary in size, shape and color. Rabbit is much bigger than Mouse. When Rabbit is trying to fix what he has done wrong, and he starts to stack the animals, you can see the size difference in animals when he is pushing an elephant, or the hippo. You how he should have stacked the animals according to size, but he puts a hippo on top of a deer. The book has to be turned 90 degrees to see how he has stacked it, and you see the great size of the pile he has. This contributes to the story because it shows him trying, and it shows the how thought out his plan is to fix what he has done.

This book is very cartoon like, because obviously a rabbit can not push all the animals that the book says it does, but its art style is also realistic. One of the pages that caught my eye was when Rabbit was pushing the Rhino to his pile of animals to stack. The detail of the rhino is amazing. The shadows that show its great size, the fact that the rhino is on two pages and split through the center is to show how big the rhino is. It also shows the rabbit struggling to push the rhino.

Another page that caught my eye is when rabbit was carrying the hippo like it was nothing. Granted, the rhino is shown larger but rabbit is having no problem moving the hippo when he struggled with the rhino.

It seems like it gets easier and easier for rabbit to move the animals, while they do get smaller it is like he is more determined.

The style of this book is cartoon realism. It has the cartoon features, like a rabbit being able to carry or push elephants and rhinos, and pretty much every animal that he is carrying. The realism is the fact the the animals do not have the classic cartoon character characteristics. They are all drawn pretty accurately. The Mouse is way smaller than the bear, the bear is smaller than the rhino. The details are not over exaggerated at all, and the colors are classic colors of what that certain animal would be.

The style makes the reader want to read the book. It is silly enough to know that it is obviously a fake story, but it isn't drawn to a point that you can not tell what the animal is at all. It helps you see the size differences and the facial features of some of the animals show it made, or confused.

Eric Rohmann, who is the author and illustrator used oil colors to add the life to this book. He liked the bold color and chunky, jaunty lines, since that is what he started out doing (ericrohmann,com, 2016). It also has water color in it. He used a relief print, which is a fancy way of saying that the lines stick out and are thick while the blank spaces are blank. The fact that the lines actually are not as harsh as it makes it sound, it makes it a very easy read. You have to rely on the pictures for a good bit of the story to understand what is going on, and the light colors make it very easy on the eyes and does not give you a headache. 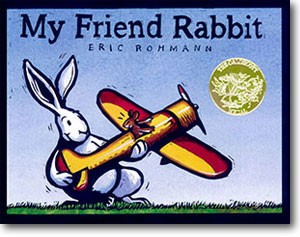 My Friend Rabbit has few words, so you have to rely on the pictures to tell the story for you. When there are no words on the pages, the pictures take up a very good amount of the space, and are very big so you know what you are looking at. They are not too cluttered, and everything has its perfect place to go along with the story. The narration is hard to tell who is talking, but at the end of the story you find out that it is Mouse. Mouse is always in the frame of the pictures though, so if you really look at the pictures you would know that it is him talking.

The words and text show meaning because it shows that even though Rabbit may cause a lot of trouble, he means well. He always tries to fix his problems, and his friend Mouse still loves him and wants to hang out with him no matter what happens. He trusts him when he says he has a plan to fix whatever he has done wrong. The pictures show how hard he tries because he does not want to disappoint his friend Mouse. He wants to prove that he can do good and that he can fix his problems that he caused.

Katiee is using Smore newsletters to spread the word online.