Maddi is using Smore newsletters to spread the word online.

Get email updates from Maddi:

By: Maddi and Melanie

By: Maddi and Melanie 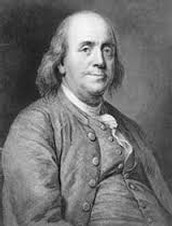 Ben Franklin was a self made man. He was one of seven children. By the age of twenty four he owned his own print shop, he was the publisher of the Philadelphia Gazette and a prosperous merchant. In 1775 he sailed the Atlantic Ocean to come back to America because the British were publicly attacking him for his beliefs.

Ben Franklin was a great inventor. He invented such items as the bifocal glasses. These were a great invention because it allowed people to see things much clearer. He also invented the armonica which is a musical instrument. It was made out of glass cups that were moist and you rub your finger over them to make a sound. Another invention was the open heating stove, this was great for houses and cooking. The lighting rod was a very big invention because it gave more information about electricity and lead to him being elected for England's Royal Society. 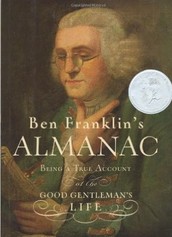 Ben Franklin's Contribution to The Founding of our Nation

Franklin’s literary talents and accomplishments were very significant to the founding of our Nation. There is much proof of inspiring the people intellectually. For example, biographer Carl Van Doren has written much appreciation for him, along with many others, including even plain folks. Franklin also contributed to our armed forces of the U.S. For example, Franklin left for Paris to Negotiate the treaty that brought the French into the war on America’s side. Franklin also helped draft the Declaration of Independence. Ben Franklin was the first american diplomat. 1776-1778 he served a commission to France charged with the task of getting the French to support America and our Independence.

The Poor Richard’s Almanac was one of Franklin’s biggest accomplishments in publishing. The Poor Richard’s Almanac reappeared for over twenty-five years. The main character, “Poor Richard”, was an imaginary astrologer. The Almanac included weather forecasts, astrological advice, tides, phases of the moon, recipes, jokes, poems, maxims, and simply a calendar. Every house had an almanac, so Franklin’s was sure to be a success.

Some of his Aphorisms were:

Benjamin Franklin in a Nutshell

Maddi is using Smore newsletters to spread the word online.