An Author on the Road

An Author on the Road 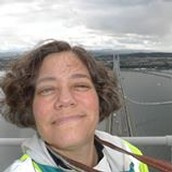 Elizabeth Wein, author of many young adult books, was born in New York City in 1964. When she was three, she moved to England, where she began school. When she was six, Wein went with her father to Jamaica. While in Jamaica, Wein became fluent in Jamaican patois. Unfortunately, in 1973 her parents separated, and she went back in the USA, living with her mother in Harrisburg, Pennsylvania. When her mother died in a car accident in 1978, Wein’s parents took her in and raised her. Wein is clearly a well travelled person and has been separated from both her parents. In many of her books, Wein writes about situations similar to her own: characters who are well travelled (Code Name Verity, Rose Under Fire, The Winter Prince, A Coalition of Lions, Black Dove, White Raven) and characters who have been separated from their parents (Code Name Verity, Rose Under Fire, A Coalition of Lions, Black Dove, White Raven).

While Wein writes many adult books, I primarily focused my study on a selection of her young adult books. Reading these books, I found many patterns in the way she writes. Wein’s books are not normally driven by setting. Instead, they are mainly focused on a suspenseful, complicated plot (A Coalition of Lions, The Winter Prince, Rose Under Fire) or the bonds made between characters (Code Name Verity, Black Dove, White Raven). Two of Wein’s main goals in her stories are to create a suspenseful page-turner that always leaves the reader thinking, and to create empathetic characters who can connect to reader. However, Wein tends to avoid using anthropomorphized animals. She is not interested in ending her books with “happily ever afters” and sometimes ends the book with a character making a big decision that may change the course of the story. 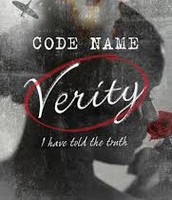 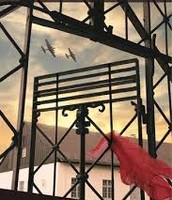 Some of Elizabeth Wein's books 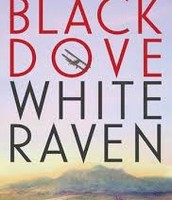 Some of Elizabeth Wein's Most Common Writing Techniques:

At the end of sentences with dialogue, there is an adverb after the speaker tag. Doing this, Wein is showing the reader the character’s tone of voice. Additionally, she is building a mood in the story.

Wein ends dialogue with a dash, and instead of being interrupted by more dialogue, it is interrupted by a thought. Wein does this because she wants the reader to understand the movements of the characters as they are thinking, or the narrator’s interpretation of what another character is saying.

Wein uses one sentence paragraphs to add emphasis to the sentence. They sometimes are used as a sidenote directly to another character in the story (The Winter Prince, Black Dove, White Raven). Other times, they unveil something about a character or a character’s actions (Rose Under Fire).

Clash with a Dash

In her many of her books, Wein uses many dashes to separate two independent clauses. The dashes are used in the place of a semicolon or a comma. The sentences that have these commas are compound or mixed sentences. These dashes are used about two to three times each page. This is Wein’s most reoccurring writing technique. 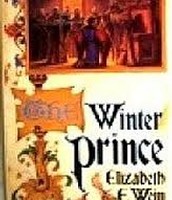 Some More of Wein's books 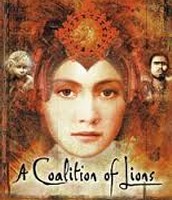 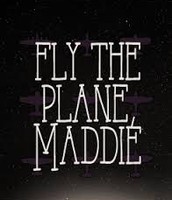 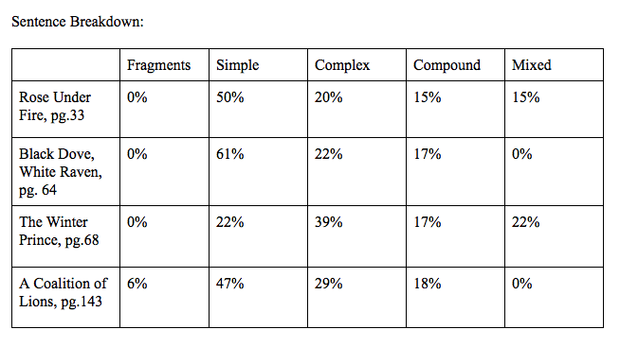 Elizabeth Wein’s books usually consist of characters who are rebelling against the society. In general, Wein shows what the society is doing to harm the character, and what the characters do as to fighting back. In Black Dove, White Raven, Emilia and Teo travel with Emilia’s mother to Ethiopia to fulfill Teo’s late mother’s wishes. In Ethiopia, Teo will not be discriminated by the color of his skin. In Rose Under Fire, a young pilot in the ATA is captured by the Nazis and taken to a concentration camp in Ravensbruck. There, she meets many new unforgettable women. In The Winter Prince, Medraut’s mother gets banished from the kingdom by the high king, Artos. Medrauts mothers is determined to deteriorate Medraut's loyalty to Lleu, Artos’s son. A Coalition of Lions does not focus on rebellion against the society, but it deals with the way the society acts. When high king of Britain, Artos, and his sons die, Princess Goewin journeys to Aksum. There she meets Constantine, her intended husband. However, she finds out that the country is in political turmoil. Each of these stories show a journey of rebellion against different societies.

A Short Story in the Style of Elizabeth Wein (click here)