Later at night, after robbing the liquor store with an unloaded gun, Dally Winston ran to a phone booth and called the Curtis house. The greasers had answered the call and he had said the cops were on him and to come to the park, they went to meet him at a vacant lot but the police had followed him there. Dally had been trapped, and was shot multiple times by the cops.

Dally robbed to liquor store with an unloaded weapon 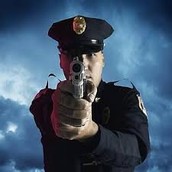 The cops find him in an empty lot and shot him multiple times.

Dally is shot and is suffering from bullet wounds