American soldiers began to fight in the last year of the Great War. They fought along side with their alliances being France and Great Britain. When we first entered the war we were known as The American Expeditionary Force. Americans went into war just plain shirt and pants that were an olive color. They were equipped with a gas mask, belt, backpack, weapon, and helmet. The standard gun for the American army was the U.S. Springfield due to its reliability. The United States' troops fought in many wars but one important one was the Western Front in France.The AEF sustained about 320,000 casualties; 53,402 battle deaths, 63,114 non combat deaths and 204,000 wounded. 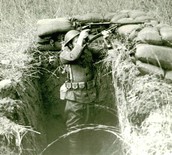 In the War the British were known as the British Expeditionary Force. They were into the start of the war with France as an ally. They were the most equipped army in the war and were the only army to wear a camouflage type of clothing. When joining the army every British soldier was equipped with a British Lee Enfield which was very standard rapid fire gun. The battle of Marne on September 4th 1914. The Germans were advancing through Belgium and Northern France. British soldiers were rushed into taxis to defend Paris stopping the German army. The British army faced a total of 3.1 million casualties.

The French Army had a total of 47 divisions and 770,000 French troops ready to fight. French soldiers were very equipped and they wore a blue-grey "horizon-blue" uniform with red pants that had been approved by the French Government in June 1914. The problem was that when they were lower on land they much more easy to spot out. The gun of choice for the French was the French Lebel. This gun had major flaw which was is slow reload speed. The Battle of Verdun was a major battle between France and Germany. This battle let alone had a total of about 1 million casualties between both army's. Out of the 4 years the French were fighting 6.1 million troops were killed.